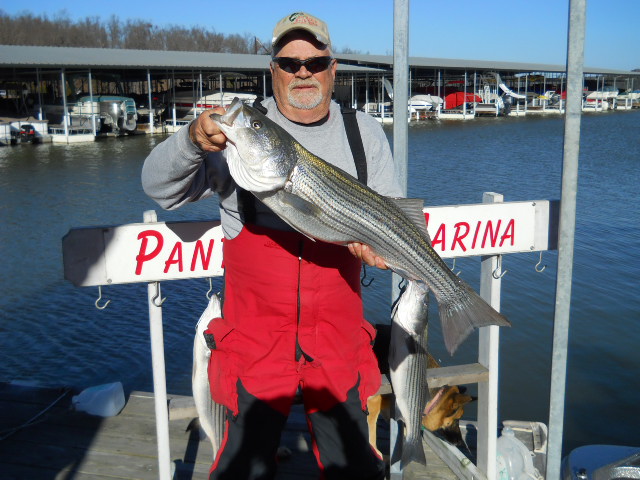 The most important change is that they have opened the spillway gates a bit and are now discharging the equivilent of three generators. The level is 569.99 and has dropped 6-inches in the last 24-hours. That is pretty fast. There will be no wading in the rivers for a while and the put and take trout are getting plenty of minimum flow. The water color is off-brown and not what I like for fishing. It is not clearing. Some stripers are being caught in the Float creek area in 25-30 feet. It has been cold with highs in the late 30's but is to be back up to 50 by Sunday. We received some mixed precipitation but not enough to cover the ground. The white bass are full of bloodied eggs and are about on schedule for a February spawn. Unless it gets very cold there should not be a shad kill.  There are plenty of shad with many large schools with no fish on them. The Game and Fish people will be at the Striper Club meeting Monday February the 22nd and the main item of interest is their stopping the stockings of Crappie, Catfish and Hybrid Stripers in Norfork Lake. They did this unilaterally with no imput from the public. Executive orders are not good. The meeting is at 7-PM at the Eastside Baptist Church at 718 East 9th Street in Mountain Home. If you care about Norfork Lake Fishing it would be good to attend whether a member of the Striper Club or not. Maybe we can change their minds. Norfork needs more stockings not less. I wonder where the fish are going? They are not increasing the numbers of stocking of other speces to make up for the cuts. There is a shortage of big stripers in Norfork now. You can also contact the head of fisheries in Little Rock at Chris.Racey@agfc.ar.gov and express your views. There are not too many fish in Norfork Lake. We are nothing like Greers Ferry. Everything was going well and the new regime in Little Rock wants to change everything.