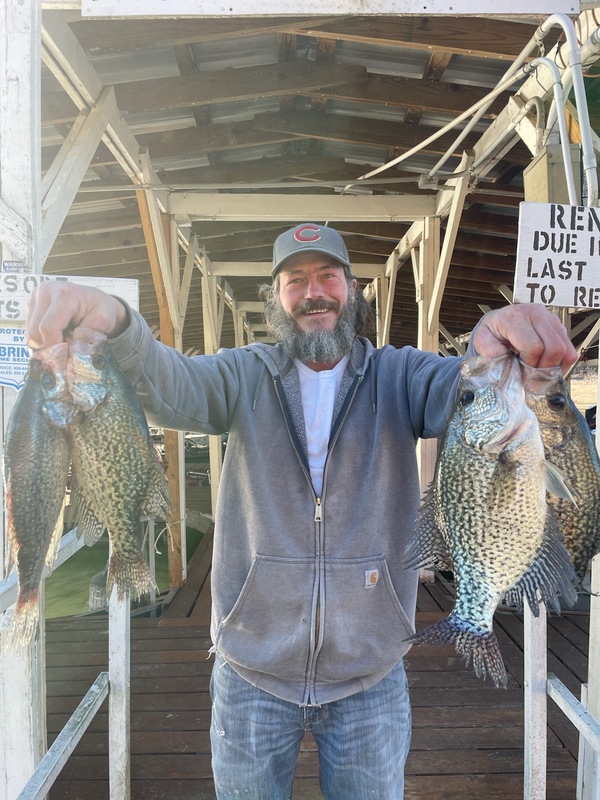 The lake level is 553.57 and is the same as it was at this time yesterday with one generator running about 1/2 the time. There has been no generation since 10:PM last night. The White River at Newport is still stable at 17.16 feet. The surface water tmeperature was 50-degrees when I came in last evening at dark and the water clarity was fair and I could see my lure down about 4-feet everywhere I went. These conditions are typical this time of year. The normal average high is 43-degrees and we have been consistently above that since the very cold weather earlier. The days are getting longer and the sun angle getting better so we should start to warm up a bit later this month. The full Wolf moon was yesterday and was also a micromoon and the coyotes were howling last night. Bluegill and stripers are about the only fish that like a full moon but it did not bother the crappie from biting last evening. The big ones in the 13-14 inch range were biting slowly but steadily from about 3:30 PM until almost 5:PM and then all sizes started more quickly until it was too dark to see. They have been coming up shallow to feed every evening now just before dark for several days and can be caught casting a Bobby Garland jig just past the brush and letting it sink into it only about 5-6 feet before they hit it. Also dropping the small jigging spoon down several feet and vertical jigging it as you reel up slowly also works. A slip float with a live minnow works the best earlier in the evening about 9-10 feet down over the brush before they come up. White Bass are also pre-spawn feeding deep on the bottom in about 50-55 feet of water but they all die when brought up from that depth. I see some of them and some small stripers and hybrids floating on the surface where people think they are releasing them only to turn them over to the Herons. The answer is to just not fish for fish that deep unless you need meat for a starving family. Bass are also going to the bank late just before dark to feed at the same time as the crappie. If you fish for them earlier fish shadowy banks where the wind has been blowing directly into. I can tell you for sure that catfish do not like full moons or a dropping river and that is what Norfork Lake is, a flooded river. I did not catch any walleye yesterday but am releasing all of mine until the spawn is over. Blackburns is full now but will have an opening early next wek so come on down. If you are staying where you are nearly the only customer you are either in the wrong place, paying too much or both. That won't happen here. Give Debbie a call at 870-492-5115 we are open all year.