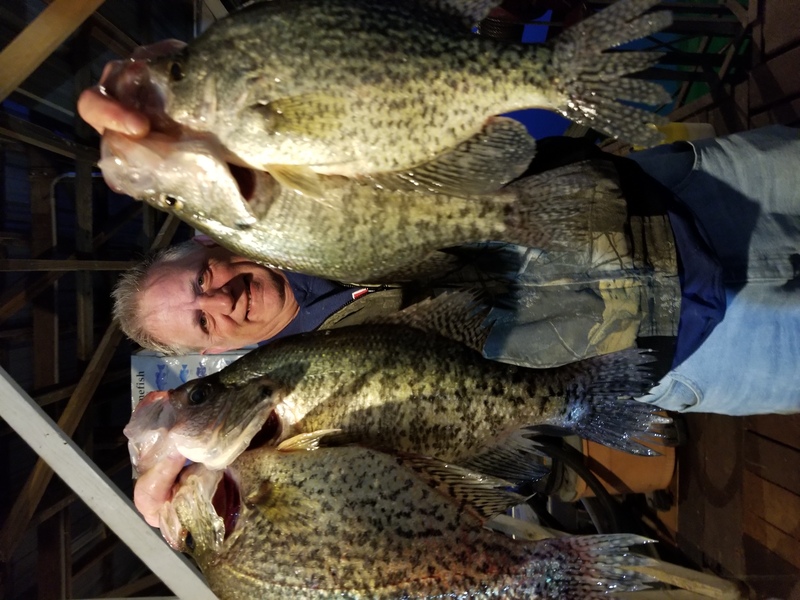 The lake level is 553.75 and is right at the top of the power pool where the power company takes back over generation. Expect it to slow way down again if they hold to their past practices of holding the level up as high as possible for as long as possible so they can flood us out in the spring. The policy is hold until it gets near full and then flood everything out downstream and open up the flood gates bypassing the generators. Sounds a lot like the immigration policy. They run one generator for about 20-hours yesterday and the White River at Newport is 12.22 feet. It was 16.36 feet. The surface water temperature is 53 degrees and the lake is starting to clear again. This report is for the lake between north of Cranfield Island and south of Robinson Island including Float Creek and the Bidwell area. I seldom go out of that area and do not have to. About the only exception is when I go with Bink and he fishes Big Creek  because he keeps his boat at Quarry Marina. I will be going with him soon. That is the only time that I fish red meat fish except when I catch them accidently. Some big stripers are showing up on Bull Shoals and some people that usually fish for them here are going there. Bink predicted this would happen when Missouri started stocking Bull Shoals with Stripers several years ago. The big ones do not die there. It is too bad that they just keep killing the small ones here before they get a chance to grow. It is mostly because they do not know how to catch anything else and just troll. If you drag stuff through enough schools of shad you will eventually catch something. Not much skill involved. Throw away your $2,500 Live Scopes and follow the birds but quit following them when they migrate or you will end up in South America. That may not be bad as Peacock Bass fishing is fun but do not drink the water out of the Amazon River and if you drag live bait do not try and use Piranhas as bait. We have a wind chill watch in effect and are going to get some snow on Thursday and very cold after that but things look better after Christmas. It needs to. I have been doing everything possible to keep things from freezing up. Blackburns is full now but I am not so sure that I am happy about that with the cold weather coming. If your boat is on a lift better let the motor down into the water in case you might have moisture in the lower unit. A white Christmas will make some happy that are looking through the window drinking hot chocolate and saying how beautiful it is but not the ones that have to worrk out in it. I prefer 50 and sunny with light wind. It will be interesting to see how far the water temperature drops in the next several days. You will be the first to know.