Scuba Steve with the fish of the day. 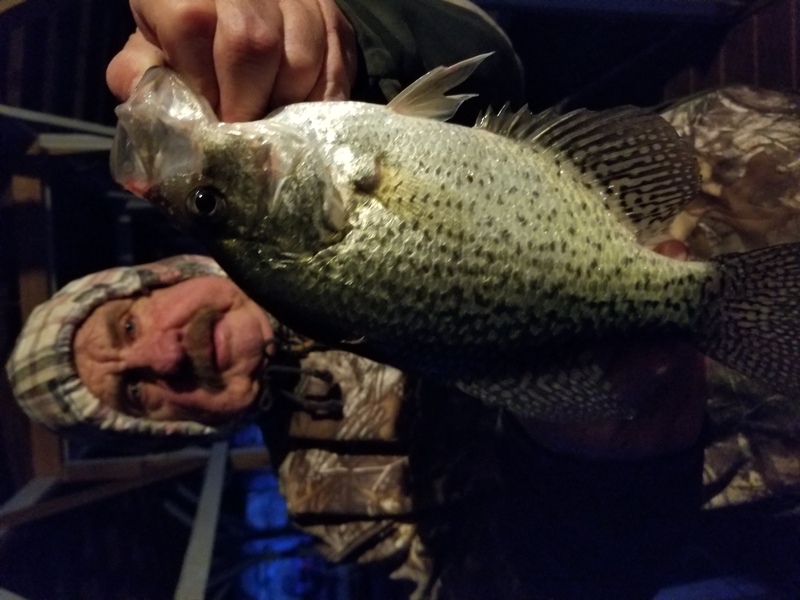 The lake level is 553.85 and has dropped 1-1/2 inches in the last 24-hours with one generator running continuously. The White River at Newport is 13.57 feet . We are approaching the top of the power pool again at 553.75 and it will be interesting to see what happens when Southwestern Power takes back over. They typically slow way down and try to keep the levels up as high as possible for as long as possible. The Corps of Engineers dropped it almost 2-feet when they took over by opening spillway gates and generating much more after the last rain. There has been no effort by Southwestern Power at a winter lake drawdown so far and seem to want to barely keep control without dropping the lake. The surface water temperature was just under 54 degrees yesterday afternoon when I went out  and the ambient temperature was 45 degrees with sunshine and light winds. It cooled of very quickly after sunset. I caught several fish but only a few keepers. I do not know where all of the smaller crappie came from. I had not seen any in several weeks and all of a sudden they are everywhere. Out of about 20-throwbacks only a few were keepers. The same with the bass. At least they were biting and I do not keep many crappie anyway and no largemouth or smallmouth bass.  It is to be very cold Thursday, Friday and Saturday nights but warm up nicely starting on Monday. All I have to do is keep things from freezing up until them. Between grading the road, winterizing boats and cabins and making improvements there is not a lot of time for fishing but I go out almost everyday. There is some small debris on windblown banks that is showing up from up north from the last rain with the increased generation and spoillway gates open and the water clarity has diminished. I could see my lure down only about three feet in the green water. Otherwise the lake is in good condition.