Scuba Steve with his best one yesterday evening. 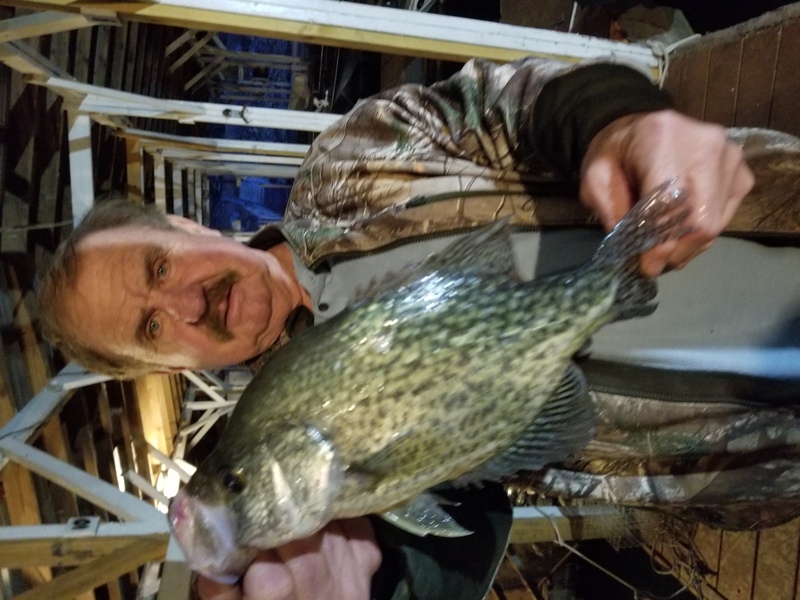 The lake level is 554.09 and is up about 1/2 inch in the last 24-hours with one generator running about 1/2 the time and nine spillway gates open just a bit releasing a little over 1/2 of a generator equivalent. The White River at Newport is 15.14 feet and is higher than it has been in a couple of months since we got into the power pool of 553.75 feet. When we get into the power pool the electric company just does not let out much water and refuses to do a winter drawdown. 554+ is way too high for this time of year and does not allow for much rainfall going into the spring. I would like to see it 548 ish going into May and try their best to keep it there instead of using the stupid 12-ft. rule at Newport which is old and outdated. It was not bad out there yesterday after the rain and the fishing was not bad either. I caught a few of about everything but not a lot with most of them coming just before dark. That is definitely the best time for bank bass and shallow crappie. I saw one other boat out there trolling around but did not talk to them but there are a lot of open water bait and fish at about 40-ft.  The surface water temperature was 55 degrees and the main lake was still clear and the creeks still stained. I received about 1.7 inches in the two day total and most of it run off with the ground now being saturated. It is to get very cold later next week with highs barely getting above freezing and lows in the teens. It was bound to come but that does not make me like it. When the rod eyelets freeze and the drag on the reel freezes it is over for me until it gets better. It is not good on boat motors and steering cables either.  I like 50 but low 40's will do if there is no wind but that is to start today also. I will check things out and let you know.