Dave Titus with some nice ones yesterday on Blackburns Brush Piles. 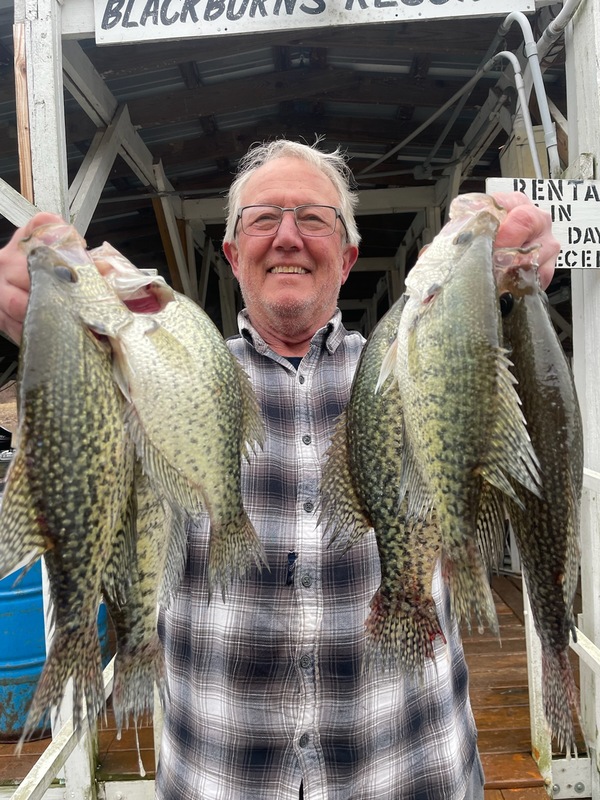 The lake level is 553.27 and has risen 8-inches in the last 24-hours with one hour of running less than one generator. The White River at Newport is 9.77 feet and is as high as it has been for weeks but it is not coming from the Norfork River. The surface water temperature is just under 56-degrees and has remained fairly stable for about three weeks with the milder weather. It is to cool later this week. The nighttime lows have not been below freezing this month so far but that is to change. The creeks are still stained from the earlier rain but are clearing. The main lake remains fairly clear and you can see your lure down about 5-feet in the sunshine but there has not been much of that. Crappie fishing is the best now on main lake brush with a jig, small spoon or slip float with a minnow. It is a little slow during the middle of the day but picks up nicely form 4:PM until dark. Some nice big bluegill are with them along with a walleye or two and some Kentucky Bass. Several fish are coming up shallow in the late evening to feed. Open water fishermen are doing fair on the spoon early in about 40-feet. No matter the depth of the water the fish seem to like 40-feet. They are also dragging about anything they can tie to through the schools of shad over and over all day long in the same places in front of Mallard Point to Cranfield Island and across from Bidwell point by the docks on the northeast side. The stripers are running from 4-6 pounds with some hybrids about the same size as the stripers. These fish are only about 3-years old but they just keep killing them and none were stocked due to covid in 2020. There were 111,457 fingerling striped bass and 68,425 Hybrid Stripers stocked this year so it should keep the meat hunters busy killing the small ones for a while. We will pay for 2020 with that class not there. I wish they would lower the limit to two and let them grow a bit. I know of no striper kill this year but it mostly affects the big ones and most of them are already gone. Arkansas does not stock stripers or hybrids in Bull Shoals Lake but Missouri does. They stock from 16-22,000 every other year and they are starting to show up and growing very rapidly with much less fishing pressure. They quit stocking brown trout in Bull Shoals in 1992 and the rainbow in 2014 due to Zebra Mussels. They could not stock trout with Stripers present because they ate them as fast as they could put them in. Stripers love trout. That is why trout fishermen hate stripers and hybrids and boy do they. The feeling is about the same for walleye but I like walleye and they reproduce naturally in Norfork. I have caught several 5-lb. rainbow many years ago in Bull but they are long gone now.  I would trade red meat fish for walleye any day but there is a commitment to stock Stripers and Hybrids in Norfork and I do not see it going away any time soon unless the late summer kill resumes but the fish have to get big for that to happen and with the fishing pressure and more people killing the small ones increasing, that probably will not happen also.  Blackburns has one cabin open as of today so come on down. We will not charge you too much and your first boat stall is free. We are also open all year and there will be no price increases. Call Debbie at 870-492-5115