Tom Kelly with some nice ones yesterday. He is a good fisherman and sportsman. Off to his trophy pond they go. 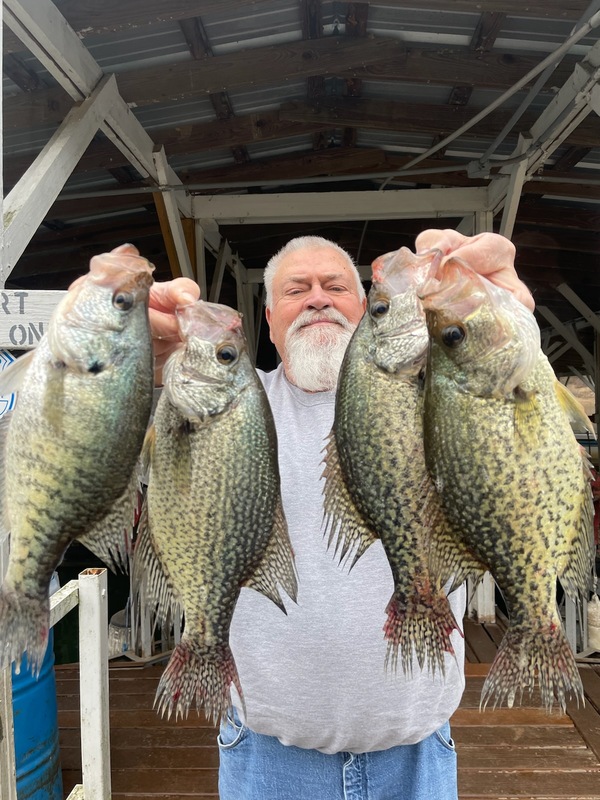 The lake level is 552.39 and has risen 1-1/3 inch in the last 24-hours with almost no generation. The White River at Newport is 7.72 feet and is the highest in weeks. It is not coming from Norfork Lake. It rained 1.2 inches on Wednesday night but the creeks did not run. The surface water temperature is just over 56 degrees and the main lake is clear and you can see your lure down about 5-feet and the creeks are stained a little green. The water is very clear near the shore. I went out about 3-PM on a cloudy day with no wind and temperatures in the high 50's and very pleasant. I fished a main lake brush pile in 25-30 feet and caught two fish in an hour and moved getting a little bit discouraged. The fish started biting after just a few minutes. They did not hammer anything, in a frenzy or monsters but were pretty good crappie. I leave out the drama but did not miss any or get broken off.  One was about 16-inches and the rest were from 11-13 inches. I kept five for my friend Jerry Conley and released the rest under the dock. The school is getting big there. I caught fish after fish from 4:30 PM until it was too datk to see just after 5:PM. I have not done that in several weeks. It was a pleasant change and I did not have to chase open water fish all over the lake. I also caught a couple of very large Bluegill which are the best to eat. I am trying to cut back on fried food but two peppered bluegill filets between two pieces of buttered bread and a slice of onion are hard to resist. Blackburns is full right now but have an opening starting on Sunday so come on down. We will not charge you too much. If you are staying where you are nearly the only customer you are either staying at the wrong place, paying too much or both. A free stall for your boat comes with your cabin. No price increases again this year here at Blackburns. I thought about buying myself a new live scope for my boat but they cost more than my boat so I bought a new Queen sized bed for cabin # 15 from Furniture Depot in the Ozark Shopping Center yesterday. Nice people, best prices and most inventory.  I know where the fish are anyways. Things are shaping up nicely here at Blackburns.