Mike with a 6+ pound bass released under the dock. 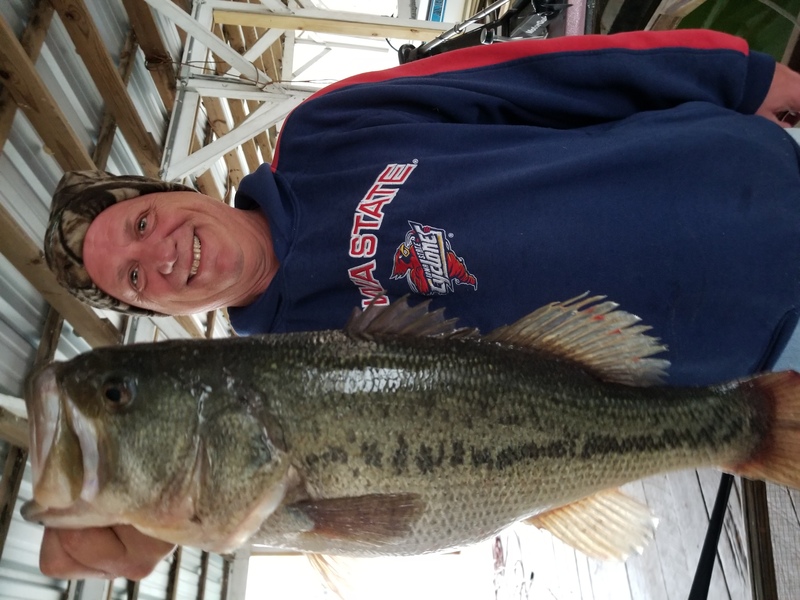 The lake level is 552.27 and is finally dropping again after the 1-1/2 inch rain last Saturday. It dropped 1/2 inch in the last 24-hours. There is absolutely no effort at a drawdown so far this winter. I guess they want to keep it high so it will be sure to flood in the spring. The White River at Newport is 4.81 feet.  They are running one generator in the morning for a few hours and again in the evening. We received almost 5-inches of rain in the month of November and for the most part they came fast and hard rutting the roads. I have been working steadily to get them back into shape and they are pretty good now. I will start to save the money to buy gravel. That price is going up too but not Blackburns Resort and Boat Rental prices. We continue with our plan of continued improvement without raising prices but it is getting harder. Fortunately I have not only the best place but also the best employees along with the best price.We want you to have an affordable vacation and are not trying to see how much money we can get from you. The lake is trying to clear again after the last rain and is a good color for fishing. Mike, Dave, John, Tom and Bink all report catching some fish but it is not easy. Bass fishing is the best but there are a lot of small ones before you catch a keeper. There are more different species of fish in open water on shad than in the past. I attribute it to the absence of the big stripers and the lack of competition for food. I have never seen more crappie or catfish on shad in deeper water and there are lots of schools of shad with nothing chasing them. Many are in the 40-45 ft. range no matter how deep the water. People talk about flats but everything that is not a main lake channel is a flat. An example is Cow point. You can go 3/4 of the way across the lake on  the  point before it drops off to 30+ feet. This is an excellent place for open water fish this time of year. Also from the docks around Mallard point if you follow the channel swings to Cranfield Island is also called a flat. The water deepens gradually as you go away from the shore unlike off a river channel bank which drops off quickly. Finding feeding fish is lot easy as there are so many bait fish but if you drag stuff around through enough schools you will catch some fish. Trolling around in open water for hours in the middle of the lake in the wind is not for me but it is one way to catch fish. I prefer to get out of the wind on brush piles that are holding fish and work it until they bite. I know I sometimes stay too long in one place but persistence usually pays off. Harvey Hall was the best Norfork Lake crappie fisherman that I have known and he would move brush to brush until he found feeding fish and always found them. That is why people that put in their own brush piles have an advantage. He used only live bait and preferred threadfin shad over anything else and that boy could catch crappie. Jay Smith was just as good but I did not fish with him but many did. They are both not on the lake anymore and the crappie population is the better for it. There are several new crappie guides but I have not fished with any of them. Some fish both Bull Shoals and Norfork indicating they have trouble on Norfork sometimes. Work the main lake channel banks with soft plastics that the wind has been blowing into for bass.