Scuba Steve with two of his best ones yesterday. The pond is filling up. 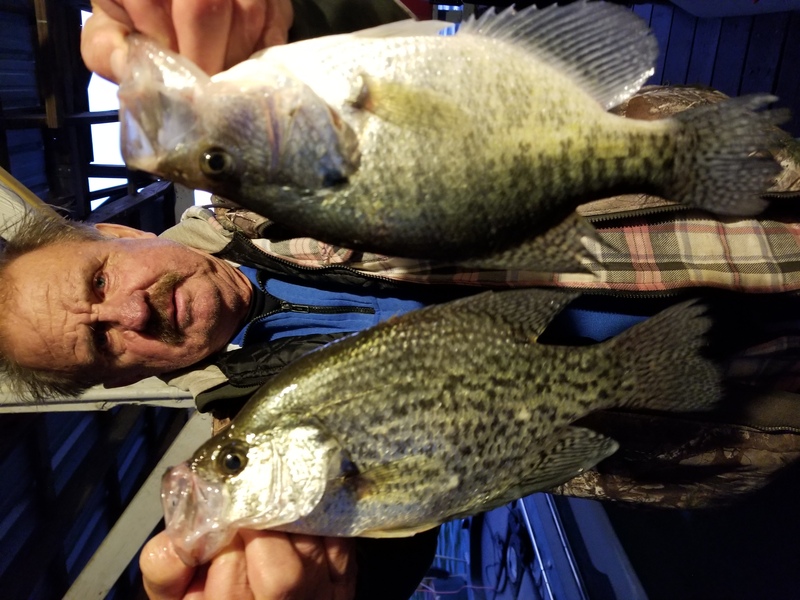 The lake level is 551.87 and is just about what it was at this time yesterday with one generator running for about four hours in the morning and again four hours in the afternoon an evening. We have received one inch of rain last night and so far this morning and it is still raining. It has been slow and steady and has sunk in with the creeks not running yet. It looks like we could get some serious rain on Saturday. The most thing that changed yesterday was the water clarity. It was noticeably more clear on the main lake and the creeks. A lot of the green stuff that was suspended  had settled for some reason overnight. I have not been out yet today with the rain but will when it stops. The surface water temperature was 59 degrees pretty much everywhere I went. I was working the bank for bass and spooning the brush for crappie and catching a few with bass fishing starting to improve. You still have to work for the crappie but they are nice sized. I talked to a troller using a planer board and he said he fished all day on Monday and chugged for miles and caught nothing, found a school of White Bass feeding on Tuesday and caught several in a few minutes and they were gone, and was having a tough day on Wednesday but found one school of small hybrids with some small stripers mixed in an caught one of each before they were gone.  It was either feast or famine and mostly famine but at least caught some. I am working hard for all of the fish that I am catching. It is not easy but slow and steady. The fish that are usually on the brush this time of year are not there in numbers. I am not finding any large schools of feeding crappie but maybe one or two in each place. The middle of the day bite is very slow even on a cloudy day and they start to bite shallow from just before sundown to dark and then they quit again. I am not travelling miles to find more but am fishing just my usual close places knowing they will be there some time or other. I am not trying to see how many fish I can kill anyway but do like to specialize in big ones and have been known to catch a few. Largemouth and Kentucky Bass are the best bite now except for white bass which I am not interested in. They are fun when you cannot catch anything else but can not measure up to walleye, crappie, bluegill, flathead catfish and Kentucky bass for eating.  Come on down to Blackburns and we will help you with fishing and will not charge you too much. There will be no price increases again this year here and we will keep Blackburns the best value in the Ozarks.  We like our customers and  have a lot of them.  Loyalty is good until it costs you too much.