Mike with a nice one. 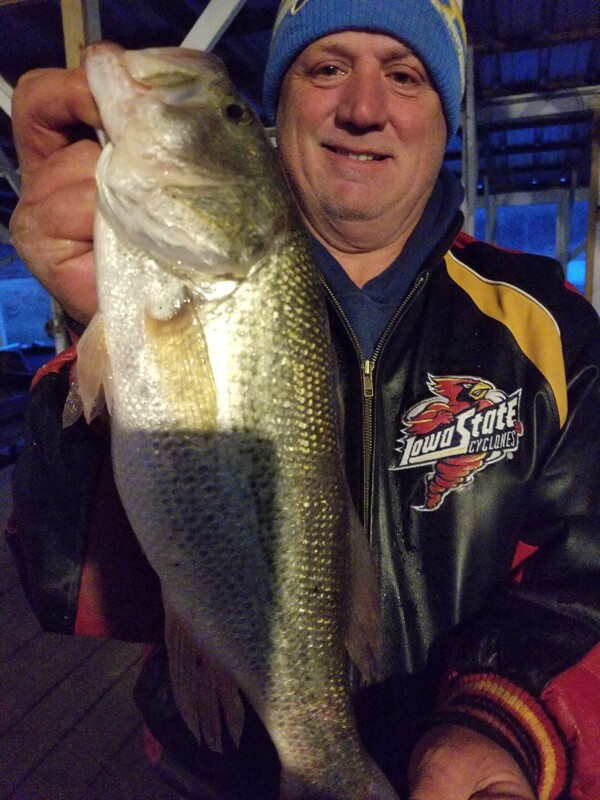 The lake level is 552.04 and has dropped 1/2 inch in the last 24-hours with reduced generation. They generated about 3-hours in the morning and two hours again in the evening. The White River at Newport is 4.4 feet indicating not much is being let out anywhere. The surface water temperature is 59 on the main lake and cooler in the backs of the creeks in shallower water and near the shore. The water is still stained green and needs to clear up a bit. The new news is that the cold weather streak has broken finally. Highs are to be in the 50's and near 60 with lows above freezing for the next several days. The cold was getting old and it is still November. The morning bite for stripers is getting better. They are schooled and being caught dragging live bait and umbrellas through shad. Not much skill involved but you can get some meat if you need it. They bite fast for a few minutes and then quit. The size ranges from 4-7 pounds and the meat hunters are keeping the population of big fish down nicely. There was not a fish kill this year and that is good but the fishing pressure is growing with the number of people moving into the area and more fishermen learning how to catch them trolling. Here is how you do it. 1:Get out before daylight and net shad from under dock lights and put them in round aerated tanks to keep them alive. Refrigerate in the summer.  2: Rig up 6-8 lines using planer boards, downriggers with cannon balls, balloons, unbrellas, weighted down crankbaits or just free swimming shad and put them in a rod holder. 3:Find schools of shad on your fishfinder and drag one or more of the above items through them until the fish hook themselves and then reel them in using a long limber pole to enhance the effect. 4: Line up a bunch of dead fish on the dock floor and take a picture. 5: Clean the fish cutting out the nasty red meat. They dress out about 30%. That about sums it up. It will be nice to be out and not freeze for a while. I do not know why crappie fishing is slow but I am having to work hard for them. Beating the bank for bass in the evening is getting better and it needed to. You have to catch several small ones to get a keeper. That will change when the size limit is taken off of Kentucky bass next year. Bass fishermen want more larger fish and I hope this works. The Kentuckies are fun to catch and are very good to eat and I am catching some as large as almost three pounds. I seems to me that there is plenty of food for everything but the people in charge know more than I do.  We will see what today brings.