Mike and Scuba Steve with some nice ones yesterday. 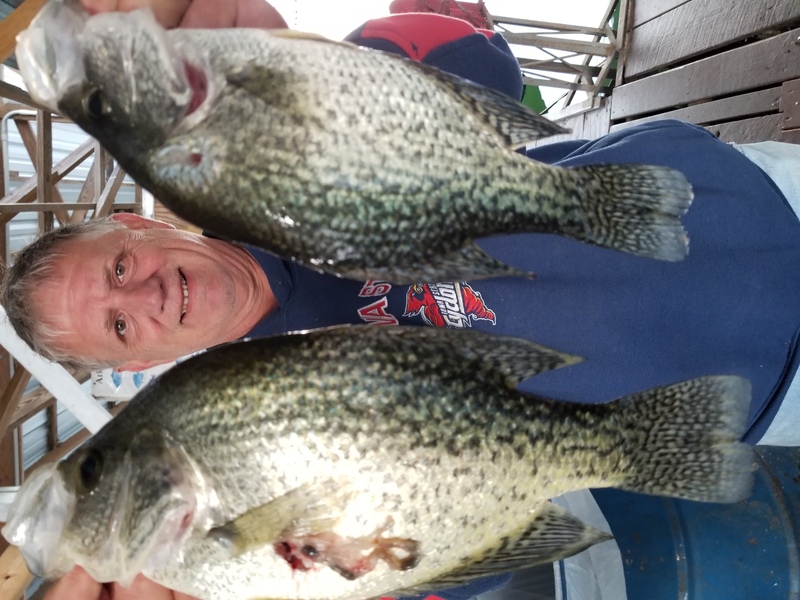 The lake level is 553.04 and is the same as it was at this time yesterday with 3/4 of a generator running about 1/2 the time. The White River at Newport is 4.54 feet indicating not much water is being released anywhere. The surface water temperature was 67 degrees with a light south wind and the ambient temperature was 75-degrees when we went out scuba diving yesterday afternoon. It was a beautiful sunny day but that is over. The high is barely to get out of the 40's for the next week with a cold front that came in this morning. Things change fast here in the Ozarks.  We went over by Robinson Island and the visibility was pretty good  and the fish were in and around brush in 20-25 ft. of water. The walleye and crappie seem to be in the same area and the black bass in the other. I saw several very nice smalmouth bass and a few largemouth but Kentuckies are still the most prevelant. Most fish were just around the inside of main lake points just a little ways back in the creeks. There was no differnece i water tmeperature from the surface down to 35-ft. That was a deep as I went. The water was a little clearer shallow but not much and it was mostly due tio sun penetration. On the way there I noticed several schools of shad with some fish on them at various depthe of water but the fish were fairly consistent at 40-45 feet deep no matter the water depth. They would have been candidates for a spoon but that starts today with my personal end of the diving season yesterday. It officially ends March 15th until June 15th for spearfishing.  I am not one of the people wanting cold weather. I have been doing fine without it but anticipate catching some nice fish this winter especially the larger crappie. I need to stock up Tom Kelly's trophy pond again. They caught a lot of fish out of it this year. I received reliable information that the Bass Cat Invitational Tournament will be on Norfork Lake next year. They put in for May 5th and 6th. and usually get what they want. It is good to have them back and they should have never left. It is not official. Blackburns still has the best prices on both cabins and rental boats in the Ozarks and a free boat stall comes with your cabin. Give Debbie a call at 870-492-5115 and come on down and check out all of the improvements. Our prices will be the same as they are now with no increases for next year. We are the first to fill up so get your reservation in early to avoid having to pay more elsewhere. Much more. We are open all year so watch here for fishing conditions this fall and winter. We do not want you to come at a bad time and as you know, the weather changes quickly here as do fishing conditions. We will not charge you too much.