The burning bush looks pretty good but the maple has lost most of it's leaves. Overall is just fair. 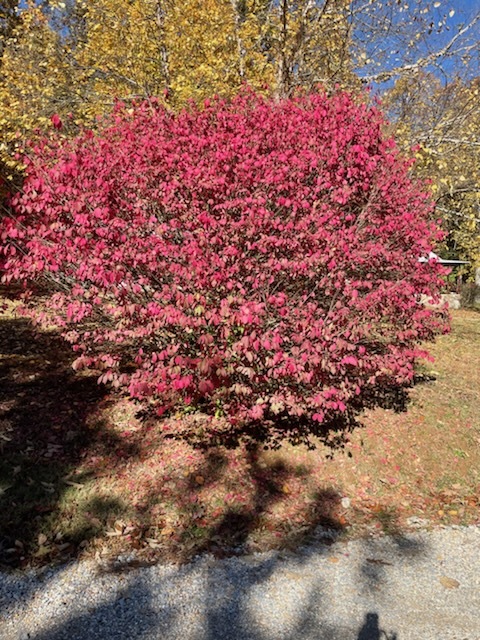 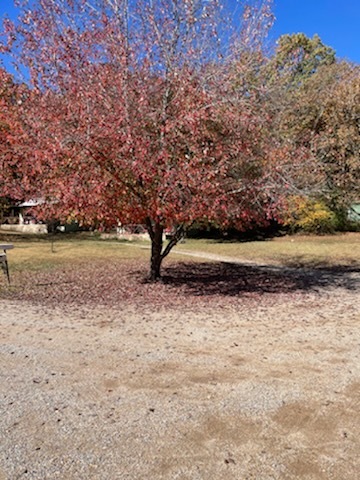 The lake level is 552.96 and has risen about three inches since the 3-1/2 inch rain on Monday and Tuesday. Most of it sank in but the creeks did run for a few hours on Tuesday but not fast. We were very dry but not anymore. The wind has been relentless with the worst being in th afternoons. The only time to get out of it is in the early morning.The White River at Newport is 2.63 feet and about ready to dry up indicating not much is being let out of the dams. The fall foliage is about as good as it is going to get now and the leaves are being blown off the deciduous trees as fast a they turn color and the best is now on the roadways and in parks and people's yard. The hillsides look better in the sunshine but are just mostly brown in cloudy weather. It is still beautiful here but not really worth a long drive to just peep leaves. Fishing the last couple of days has not been the best with the rain and wind. The rain is gone for now and the wind has layed for now but is to get heavy again this afternoon. Bass fishing has been the best back in the windblown creeks in the stained water on crankbaits and single spins early and late. Some temperate bass are still around Mallard Point heading towards Cranfield Island on the north side suspended about 35-40 ft. down in 80-ft. of water on shad.  They are mostly White Bass in the 12-inch range and Hybrid Stripers in the 2-3 pound range. The walleye and crappie have slowed and the wind makes it hard ot fish for them. The best time to catch strripers will be going into the full moon on the banks on a stickbait in the late evening and just after dark. Walleye will be on the same bank biting soft plastics earlier in the evening on the shadowy banks. Full moon is the 8th. As the water cools and the creeks cool faster than the main lake the crappie will move back to the main lake brush from 20-30 ft. of water. I am catching a few but not a lot. Overall fishing has just been fair at best for the last coulpe of days but some nice fish are still being caught.