Scuba Steve with a nice one yesterday. 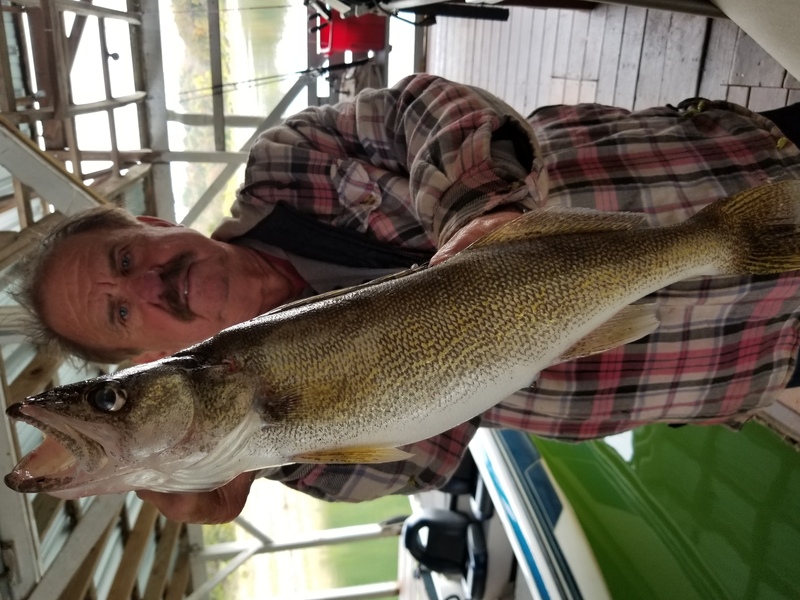 The lake level is 552.82 and has dropped 1/2 inch in the last 24-hours with a few hours of running 3/4 of a generator. They let out more from Bull Shoals and the White River at Newport is 4.82 feet. The surface water temperature ranged from just over 69 degrees to right at 71 degrees when I went out yesterday in the warm sunshine and light winds. The ambient high was in the low 70's and it was a perfect day. I noticed the lake did not look as clear from the surface and this was verified as I went from the surface to about 30-feet. The visibility was not bad 0-20 feet and then got very poor below 20-ft. It had been much better the day before. We moved to another place on the main lake a little further down stream and found the same thing. It was a little surprising since the lake usually clears in the last part of October as the water cools but it certainly was not the case yesterday. I saw a few schools of crappie shallow but they were very spooky and I could not get close to them. There were several nice bass on the way down to 20-ft. and I did manage to get one nice walleye in about 18-feet near the bottom. That was it. We will see what today brings. Blackburns has several fishermen out and they caught a few fish but not anything to get excited about. A troller dragging an umbrella caught a 3-pound Hybrid and two White Bass after going through several schools of shad and several miles. There is no danger of running out of shad in the near future and the fish being caught are very fat an healthy. In some ways the absence of most of the big stripers is helping the overall fish population. Several people like to fish for them but bass and crappie are the most sought after fish. I hope they make a comeback but people are killing too many small ones especially when fishing in deep water.  Blackburns is still the home of the $59/day one bedroon cabins and $77/day two bedrooms. We put people ahead of money and will not charge you too much. Your cabin also comes with a free stall for your boat.  Compare and then call Debbie at 870-492-5115. Yes we know where the fish are. We are getting a lot of compliments on the high quality of our many new mattresses and bedding and you can thank Furniture Depot in the Ozark Shopping Center for that. They are the best. We offer good fishing and a better night's sleep here and at the best price.