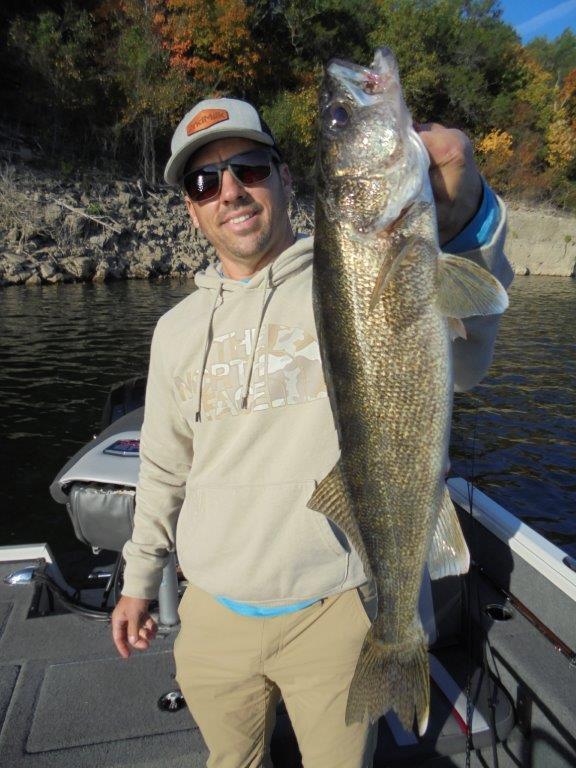 The lake level is 553.15 and is exactly what it was at this time yesterday with no generation for the last 24-hours. They did start up 3/4 of a generator a couple of hours ago to keep it from rusting shut. The White River at Newport is 2.87 feet and continues to be very low. The rivers are plastic anyway and they get water when they generate and dry up when they don't. The Buffalo is the only free flowing river in the area. The surface water temperature was a little over 72-degrees yesterday when I went diving and it was a beautiful sunny warm day with an ambient high in the low to mid 70's. Those days are over until later in the week with a strong cold front moving in. It is windy with the cold and that should help lower the frost tonight but clear skies with no wind tomorrow night will freeze everything good.  Bring in your plants today and pick the rest of your garden. The highs are to be in the low 50's and then warm back up to the 70's later in the week. We found walleye in the same place as before yesterday but they had moved from the brush at 30-ft. to roaming in pairs shallower. Several Black Bass were with them of good size that were not here before. Most of them were in open water on shad but some have moved in much shallower now. What surprises me this year is the absence of the White Bass. This time of year I usually see hundreds of them just outside of brush in big schools. They are just not there and I have been going to places where they are always there in the early fall. Maybe they are somwhere else since Norfork Lake is changing due to the absence of the big stripers and less pressure on the shad. I was hoping the White Bass were making a comback after their die-off a few years ago but now I am not sure.  If they are still around they should move to an area from Mallard point to Cranfield Island as the water cools. Right now walleye, crappie and Black Bass are the best bite along with Kentucky Bass which are the to go to fish when nothing else is biting. It used to be White Bass. Trollers are getting a few stripers but they are small and getting smaller as they are killed off. Overall fishing is just fair but it is getting better every day and that trend should continue into the winter. When it gets cold I fish almost exclusively for crappie and catch some very large ones all winter beginning in November. The lake in general is in excellent condition. Come on down to Blackburns where you can get a nice one bedroom cabin for $59/day and a two bedroom for $77/day with a free boat stall. We are open all year.