Mike with some very nice ones yesterday Scuba Diving. Yes, we know where the fish are located. 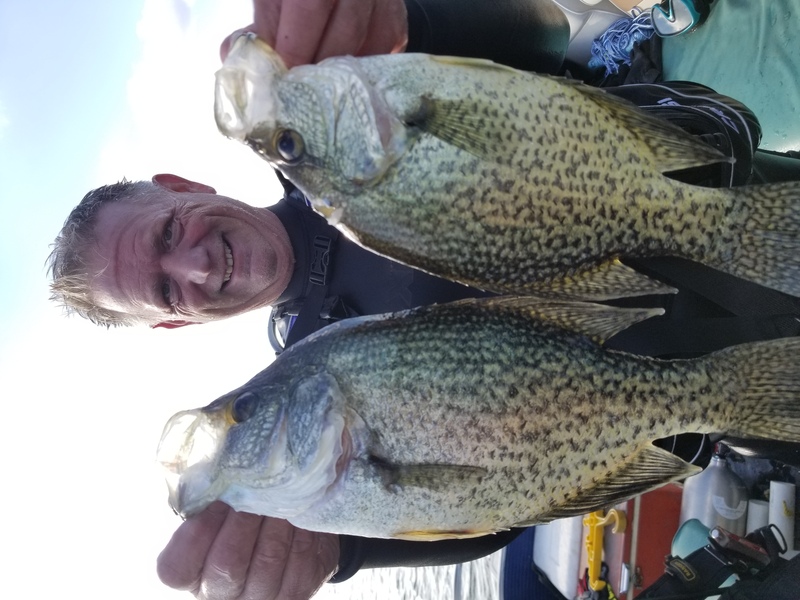 The lake level is 553.35 and has dropped a little over 1/2 inch in the last 24-hours with 3/4 of a generator running about 5-hours. The White River at Newport is 4.46 ft. and still very low with not much water being released from any of the lakes. The surface water temperature is 74-degrees on the main lake and a little lower in the early mornings. The water is trying to clear after the turnover but it has been slow and is clearing from the top down. The crappie are schooled again on brush in about 25-ft. or less and are very spooky. A lot of the fish people are seeing on their graphs above the brush are bluegill. Several Kentucky Bass are being caught on Main lake river channel banks right on the first drop-off. Crankbaits are working well for them but also a creature bait on a jig head cast to the shore and letting it drop just off the ledge is also working. There are lots of shad at about 40-ft. on the main lake in open water but many schools have nothing chasing them. The stripers being caught are small, in the 5-7 pound range and getting smaller with a 10-pounder coming in now and again. The full moon is tomorrow and about the only fish that like that are stripers and bluegill. It almost kills the catfishing combined with the dropping water level. Striper fishing should get better as we approach the full moon in November which is the 8th. If there is to be an after dark striper bite this year it will be just before that date and then diminish as it goes past. It does not always happen. I used to really catch some big ones at this time in the past but do not fish in the dark anymore except when it sneaks up on me in the evenings. My favorite time to fish is just before sunset until it starts to get dark, especially in the fall and winter. Many times the crappie fishing stops right at dark. We have a chance for rain in the middle of next week and I really hope it happens for the people that like to peep leaves. If it does not it could be a dud like last year. When my Flaming Bush just turns brown it is not a good sign but I have not given up yet. Scuba conditions continue to be just fair after the turnover but we are getting a few very nice fish. It will be over for me soon when the water temperature drops below 70 but it has been a very good year for Norfork Divers. Blackburns is the home of the $59/day 1-bedroom cabins and $77/day two bedrooms and they come with a free stall for your boat. We have different stall sizes for different sized boats, not one size fits all. Come on down. We will not charge you too much and have several rental boats to choose from. Call Debbie at 870-492-5115. We are nearly full now but will have more openings starting on Monday. November is nearly always a good time for fishing.