Fish of the day by Scuba Steve. 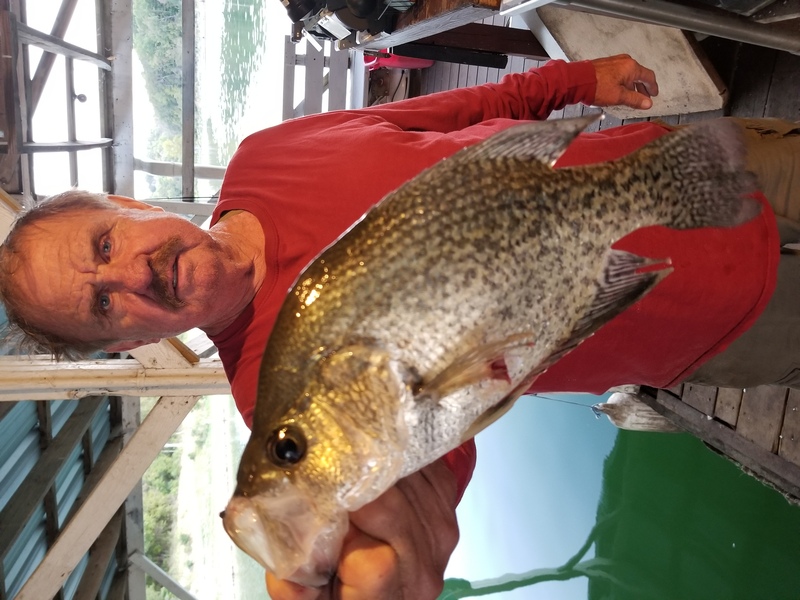 The lake level is 553.57 and has dropped 1/2 inch in the last 24-hours with 3/4 of a generator running for about 6-hours. The White River at Newport is 3.74 feet and about ready to dry up indicating they are not letting out much water anywhere. It has not rained for a month and is getting very dry but the weather has been perfect for outdoor activities. I went diving in the afternoon when I found a stopping point for my work. It was nearly 80 for an ambient temperature and the lake surface water was 77-degrees. I noticed the creek was stained more than the day before and the main lake appeared a little green from the surface so I decided to look for the thermocline. It was approacing 40-ft. the day before and was about as deep as I have seen it in 27-years of diving. It usually hangs around a little over 30-ft. in the summer but was driven deeper with the very hot and long summer. With the surface water temperature still 77-fegrees I figured the lake was going to turn over in a few days but it was still too warm on the surface. I went down to 40-ft. and no thermocline so I kept going deeper. At 55-ft. still none. The lake had turned over and the visibility and water temperature was the same from the surface to past 50-ft.  The visibility had diminished greatly and I could barely see past the tip of my spear gun which was as bad as it has been all year. It will take a few days to settle out but should clear up in a few days. It is also the first time I have seen the lake turn with that high of a surface temperature. Usually it takes a few very cool nights but it is October and the Lake always turns in October. I got a couple of very nice crappie on brush at 30-ft. and checked out another place to verify. The results were exactly the same. I did see several Kentucky Bass near the bank on a main lake river channel and a couple of small walleye. I will pole fish for a couple of days until the lake clears a bit. Barring any extreme weather the fishing should get better and better now as the water cools and clears. Thanksgiving is one of my favorite times to catch big crappie and fish for bass near the bank. The full moon in November is the best chance for you striper fishermen to get out the stick baits and catch some shallow ones near the bank after dark. I used to do that every year but recently it has not happened very often. It always happens in the full mon in March when they simulate spawn but in November it is just to feed before they go lethargic when it gets cold and they do not always do it. It is a good time to catch and release them as they are shallow and it does not stress the hard fighting fish like it does in hot weather.  For now I will fish for crappie on brush during the day and bass near the bank in the evenings.  I am a soft plastic fishermen but the crank bait guys always do well this time of year.  The next few days may be challenging but not impossible. The fish are just scattered more with no special reason to be anywhere except for food and cover. They will start showing up at any depth down to the very cold water at about 65-feet where it stays at about 58-degrees more or less all year. That is what is showing up on people's fish finders often mistaken for the thermocline. It is much more dense than the warmer water. The thermocline comes and goes but this cold water deep in southern lakes is always there. The sun does not penetrate and warm the water at these depths.  Except for stripers and a few walleye looking for the oxygen bubble in the heat of the summer few fish are there during the rest of the year. There is little or no oxygen at below 40-ft. so not much reason to fish there.