Caught yesterday on both top-water and 3/8th ounce Bink's Spoons in 60-80 ft. of water 40-ft. down on shad. White with a black back was working the best. 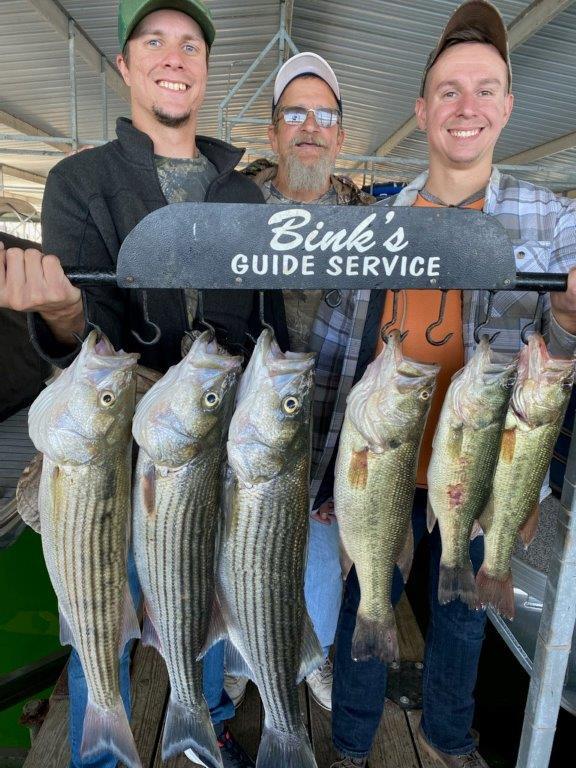 The lake level is 553.67 and has dropped 1/2 inch in the last 24-hours with less generation. The White River at Newport is 4.74 feet and has been very stable and low for a couple of weeks. They are not letting out much anywhere. We are approaching a month with no rain and none is in the immediate forecast. Maybe later this week. I went crappie fishing yesteray morning and found some in both 35-ft. brush and 18-ft. brush. I tried a slip float with minnow on the shallower brush as I do not usually spoon in water less than 18-20 feet. I caught a couple but it was slow so I switched to the 1/4 ounce Bink's Spoon and caught several right in the brush about 20-ft. down. I saw a little top-water bass but they were small today. I released all but five crappie and give them to a guest at the resort who likes fish but is not fishing. Everybody likes Norfork Lake Crappie. Bink reports catching a lot of different species of fish yesterday. It started out with bass coming up and hitting the top-water lure and then finished with stripers in 60-80-feet of water and all 40-ft. down suspended. He was dropping the 3/8th ounce white with black back right on their heads. Spoons are the best lure right now. I am just not having much luck on live minnows or Bobby Garland jigs at this time for some reason. I did get into a school of small walleye in the 35-ft. brush and caught several but they were all the same size and about 12-inches long with no keepers. I saw them down there but did not know what they were until they started biting. The surface water temperature is 76-77 degrees and the lake overall is in excellent condition. Blackburns has several guests in but still have a couple of openings. GIve Debbie a call at 870-492-5115 so you do not have to pay more elsewhere. We are the home of the $59/day 1-bedroom cabins and a free boat stall comes with your cabin. All cabins are individual with no duplexes and have big covered porches out of the sun to relax.