Caught on the spoon yesterday. 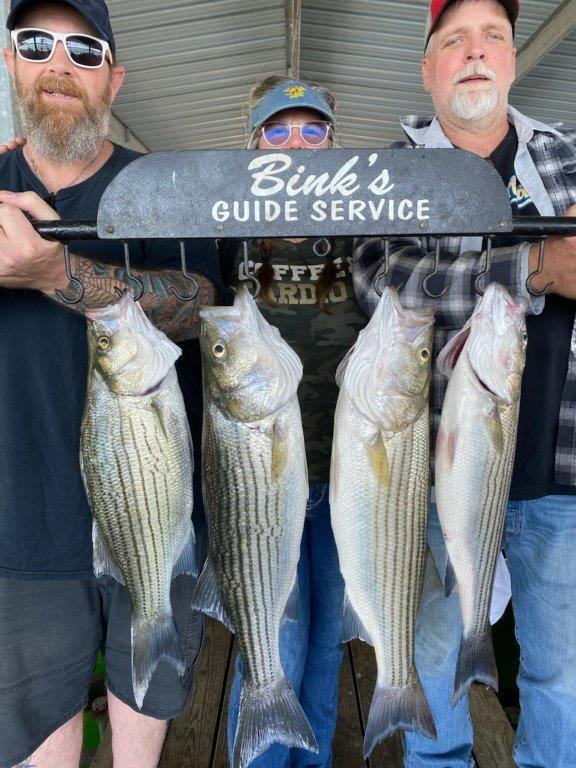 The lake level is 553.87 and has dropped 1-1/2 inches in the last 24-hours with a little more generation. Not more generators just a few more hours and starting earlier. The surface water temperature was 79-degrees yesterday afternoon when I came in about 6:30 PM. It started out windy but it layed about 5:pM which has been a pattern for the last several days. The weather remains sunny with highs in the 70's and very dry. I am not seeing as many crappie as I had been and they are not in big schools and the ones that are left are are right in the brush. More and more fish are in open water on shad with the absence of the high numbers of large stripers. Having them gone has really changed the way the fish behave. More and more bass and crappie and even catfish are on shad in open water. The big change that I have noticed in the last  couple of days is that the temperate bass are schooled and on shad with a lot of them suspended at the mouths of creeks at or just under the thermocline at 37-feet.  Several stripers in the 5-8 pound range, hybrids, white bass and black bass are all on the same shad. You will start to see trollers now catching fish dragging anything from live bait, crank baits with weights clipped in front of them and umbrella rigs over and over through shad. Many of the schools of shad are not holding predator fish but some are. There is not much skill involved but it can be effective some times of year but has it's very slow times like the last couple of months and in the cold of winter. It does not appeal to me but it is the only way some can catch fish. They miss the bite and the hook set. I can barely handle one rod at a time and if I tried hanging a half dozen off the side of the boat I would miss a lot of fish and have everything all tangled up. People ask me over and over why the thermcline is important. The thermocline is the transition layer between the warmer mixed water at the surface and the cooler deep water below. The water stratifies with the effects of the sun shining down and warming the surface and goes deeper and deeper with the longer days and the hot weather. The water starts out in the spring with no stratification in lakes and the water temperature is basically the same down to the very cold water. In Norfork the thermocline rarely gets to 40-feet. As the ambient temperature increases the first thermocline forms usually in May and it is warm down to about 18-20 feet. At this time there are a lot of fish at this depth. As the water warms the thermocline is driven deeper until it stabilizes in August. The thermocline does not go deeper as the water cools like some report. They are only looking at their fish finder and seeing a darker color of water. I know where it is because I am out there in it Scuba Diving and it is obvious.  As the water cools in October the surface temperature drops to a level lower than the former cold water and the water flips or turns over and the thermocline is gone resulting in homogenous conditions where the temperature, water clarity and ozygen content are the same down to the former thermocline which is basically 0- to about 40-feet. At this time the water becomes cloudy with the mix up and takes a few days to clear up. In deeper lakes like Norfork, the turn can be gradual or quick depending on how fast the water cools. In shallow northern lakes it can be violent and bring up huge amounts of debris almost stopping the fishing. On Norfork, it just makes it a little harder to find the fish. They need a certain water temperatue at certain times, good dissolved oxygen content, food and cover. The bait fish like cover, the oxygen is the same everywhere except in the very deep water so that is why predator fish hang out in the brush piles. Shad are the exception as they feed on plankton and it moves with the wind. There comes the difference between open water fishing and brush pile fishing. I prefer brush pile fishing because I know where the brush is located because I put it there  and get tired of roaming around looking for shad with fish under them, catching one and looking for them again. Also I am cheap and do not like burning gas. Both kinds of fishing work but I am hooked on spooning brush for walleye, crappie, bass and catfish. I do beat the banks for bass at certain times of the year. As we approach October a lot of changes in fishing will happen and you have to be out there to stay on top of it. It is challenging but more fun. It is not how many fish you can kill on given day but being the first to know where they are and catch a few, keep a few an release a few.