Scuba Steve with some nice ones yesterday. 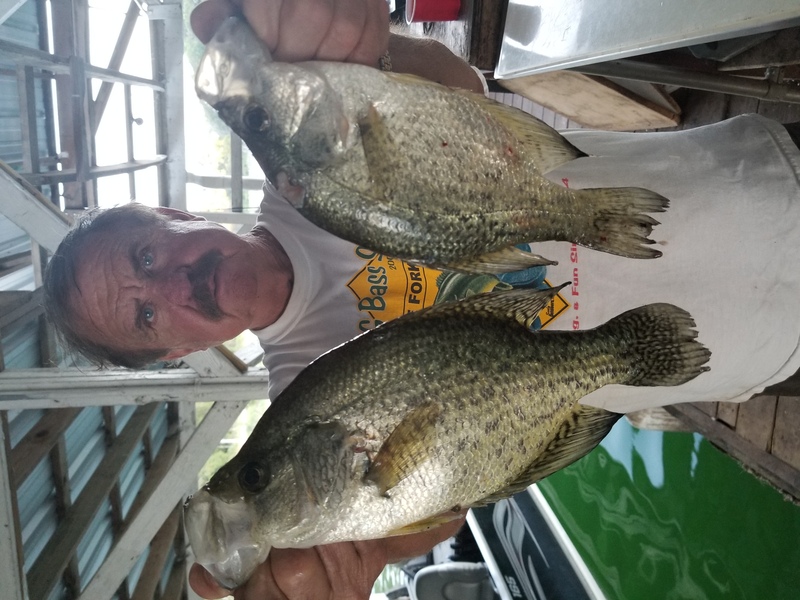 The lake level is 554.45 and has dropped 1-inch in the last 24-hours with 3/4 of a generator running about 1/2 the time. The White River at Newport is at 5.66 feet so they are not letting out much anywhere. The surface water temperature, which had risen on Tuesday and Wednesday with the ambient temperatures in the high 90's, dropped again with the cold front and highs in the 60's and a cold north wind. The water was 81 when I came in last evening. The water had also cleared a bit and there was decent visibility for scuba dining. The schools of crappie that had moved off the brush and back into the main lake on shad were back on the 30-ft. brush and should stay there for a while now. Bluegill and Kentucky Bass are with them and a few walleye. The jig was not working very well but the small spoon was. We have some striper fishermen out trolling and are not doing very well. I could not help them much and do not troll and do not fish for stripers unless I go with Bink's. We are getting to be a 5-8 pound striper lake but the crappie an walleye are making up for it. There are also some very nice sized Kantucky Bass being caught and are fun and good to eat when the black bass fishing gets tough.  They are very fat and healthy and like those 1/4 ounce Bink's Spoons. Crappie are also biting live minnows on a slip float, 4-lb. test clear line, #4 red true turn hook and a split shot that matches the size of the minnow fishing and just enough to keep the balsa pencil float straight up and down about 5-feet further down than you can see your bait, on top of the brush. We have some striper trollers in that are disappointed in the striper fishing and I am unable to help them. I do not troll and mostly just fish for stripers when I go with Bink. If they must troll and do not spoon they are on their own. We do put in the most and best brush piles though. Some people do not and just use others. Our customers like them.  Blackburns is the home of the $59/day 1-bedroom cabins that come with a free stall for your boat. You do not have to go somewhere else to launch and can park and step right on the dock. We have it all here at Blackburns and at the best prices. We will not charge you too much. We will aslo keep you up to date on the fall foliage. There is some color change on the hillsides but it is mostly brown and caused by drought. It still looks to peak at the end of October and the fishing should be good then also. Call Debbie at 870-492-5115.