Bink is still on the walleye. 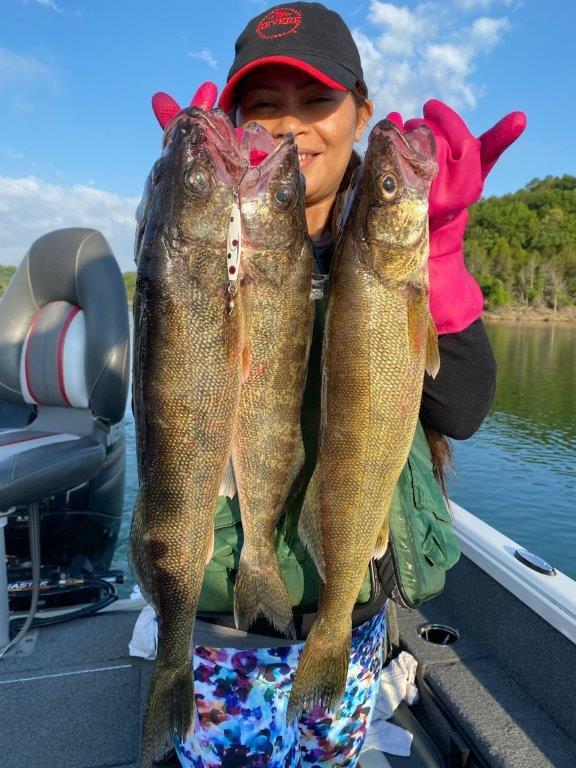 The lake level is 563.10 and has dropped 1-1/2 inch in the last 24-hours with one generator running continuously. The White River at Newport is 12.34 and the area lakes are dropping much slower now that they have gone to the 12-ft. rule at Newport. They are trying to drop Bull Shoals faster than Norfork since it has been held up so high for so long draining Table Rock and it looks like they will reach top of power pool at the same time. We did get a little thunder shower last night and it totaled 1/2 inch. That brings us up to 0.7 inches so far in July. It has been a little cooler the last couple of days but should make up for it starting tomorrow. Bink reports that the walleye are on main lake points in 35-ft. of water on the bottom and are hitting the Many Shad Spoon. The larger stripers have moved out into the river channels deep but some smaller ones are are still on shad in open water early. White Bass are schooled and are just around main lake points on the inside at or just above the thermocline. Catfish are biting live shiners and bluegill on drop-shotted jugs in 25-ft. of water or off docks after dark. Some bass are with the smaller stripers early and then move in shallow in the late evening feeding on crawdads. It is typical summer fishing but the thermocline has not pushed down as far as it usually has in the hot weather but it will. It should get down to about 30-feet by early August and we should get an algae bloom if things hold true to the past. One bedroom cabins are $90/day and two bedrooms are $113/day and come with a free boat stall for stays longer than 1-day. Call Debbie at 870-492-5115 so you do not have to pay too much elsewhere.