James Soltysiak with some nice ones. 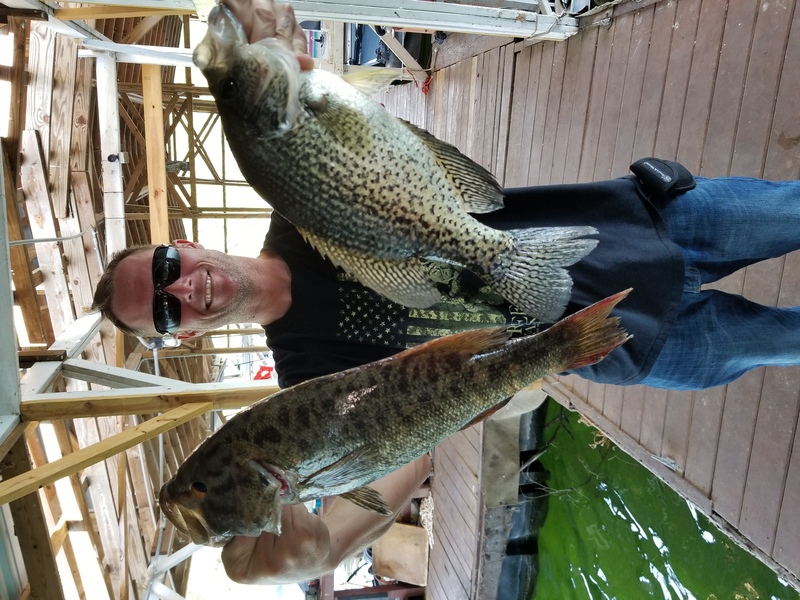 The lake level is 572.78 and has risen less than 1-inch in the last 24-hours with about 10-hours of running one generator or less than one generator. We are still sceduled to crest at 573.3 on June 7th. The White River at Newport is 16.70 and is dropping rapidly and heading toward 12- feet so do not expect the lakes to drop anytime soon and all of them are rising now even though there have been several days of no rain. There is a good chance tomorrow for about 1/2 inch. Bull Shoals is the fullest and is schedulded to crest tomorrow but I do not see how that can happen with more coming in from Table Rock than they are letting out. It may be an indication of their future plans but will have to change predictions of timing. They are not very accurate and you cannot go by them but they provide a little insight. It was a beautiful weekend weather-wise but a little windy. I have been here a long time and have never seen so many boats on both sides and between the bridges. That is the busiest place on the lake but I do not know what it was like other places as I do not go out on holidays unless I have to. Trucks and trailers were parked everywhere. I know of no accidents resulting in injuries in the area but a Missouri man drowned on the Ekl River and a cigarette boat crashed on Lake of the Ozarks with some injuries. Every cigarette boat needs to stay on Lake of the Ozarks. They like them there. There are enough Queen Marys finding their way to Norfork as it is and we do not need or want them here either. We are just a tiny little fishing lake with room for a few pontoons and people swimming around them. They like the wake boats over at Table Rock where there is more excitement and is close to Branson. We are just a retirement village here and us old folks do not want to go fast any more. Party Cove for us is to go back into a creek with no other boats where there is peace an quiet and drink a bottle of Ensure and watch a bird.  The surface water temperature is going up again after dropping from about 77. It is now near mid 70's and fishermen are out there again today with the much reduced boat traffic. It is spooning season again and it will continue for several months with the top-water bite diminishing with the increase water temperature. The thermocline is dropping and will continue to do so and fish will be around that level. The water is clearing already after the holiday churn and the lake is overall in good condition albeit high. Slowly rising water and dark of the moon is makeing for some good catfishing on live bluegills.  Cast a grub and minnow into the brush and let is sink slowly keeping it moving and you will be surprised what you will catch. Crappie are scattered as are walleye but there are a lot of them. Some nice black bass are being caught.