Fish of the day yesterday By Mike Eakle 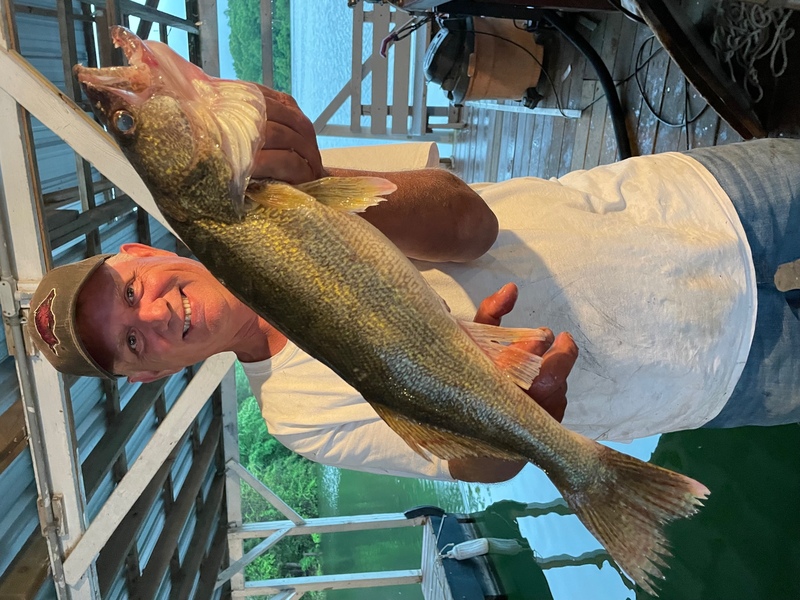 The lake level is 571.90 and has risen 1-1/2 inches in the last 24-hours with about 10-hours of running one generator. We received about 1/2 inch of rain yesterday afternoon at about 5:PM but no wind. It rained hard and some places had to get more. There was severe weather elsewhere but we were fortunate to miss it again. The White River at Newport is 18.97 and dropping and headed for 12-feet if they go by the rules. They are still running Table Rock hard with spillway gates open and filling Bull Shoals. Table Rock is 4-1/2 feet above power pool and Bull Shoals is 25-ft. Norfork is 16-ft. but they keep changing the power pool. It used to be 552 before the Minimum Flow fiasco and now is 556.75 for some reason that nobody knows but that is the number used to figure % full which is important. I anticipate the 4-lake %-full and predicted crests will change tomorrow when the government people get back from their long weekend and update things. Everything stands still until they get back to work and runs on automatic. The surface water temperature was about 75-degrees yesterday afternoon when I went out for a short time and it was very cloudy. Bass were coming up sporatically all over the place near the old shoreline and thermocline in about 18-feet of water along with a few white bass. I could see my grub down about 15-ft. on the main lake and it was too clear for me so I moved back into a creek where it was much less. The wind moved from the south to the north and the cold front came in and it is very cool this morning and highs are to be in the 60's today with more rain for the middle of the week. I saw several boats out there dragging overweight children around on chaise lounges cutting and swerving with their engines coming out of the water  and several jet skis already so the peace and quiet for fishermen is over for another season, especially on weekends. I found out that they now make boats that intensionally make wakes. They look for places that are calm and then see how much wake they can make. I wonder who thought of that? I do not know how much they cost but wonder if they still have to make payments when they are not in use. It must be fun to make payments when something is in the gargage in the winter, spring and fall. That must be like alimony.  Sounds like a good investment. They must think everyone likes their brand of music also. Several fish were caught yesterday and we will see what the cold front has brought today when I get my work done.  Keep a top-water lure ready at all times and especially on cloudy days. The rest of the time I am using a small grub tipped with a live minnow for about everything. Look for walleye right at the thermocline. You can catch some catfish on cut bait but many more on live bluegill. Flatheads will not bite anything that is not alive and I like them best. Bluegill fishing is very good under docks and around shallow willows in the creeks. Most brush piles that I have put in are too deep now even after I put in some shallower ones in anticipation of high water but not this high. I guess it was just wishful thinking that they would manage the area lakes better. A lot of fish of different species are at the thermcline and old shoreline which are both at about 18-feet. Work that in stained water back in the creeks.