Fish of the day By Scuba Steve. 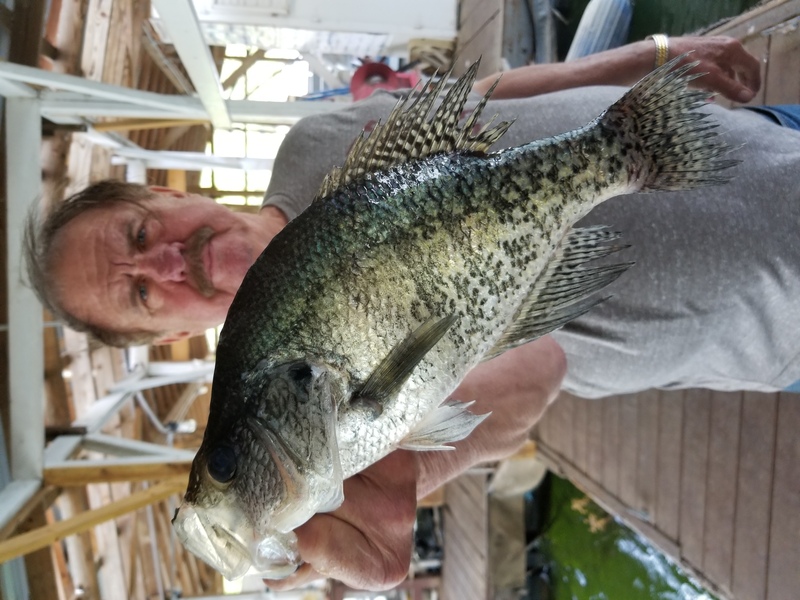 The lake level is 571.66 and has risen 1-inch in the last 24-hours with one generator running for about 10-hours. They have changed the Norfork crest to be 572.0 on 27 May but we are to have good chances of rain for later this weekend and into next week with wind today and tomorrow and cooler temperatures on Monday. There was severe weather north east of us yesterday in Missouri but again we were fortunate to miss it and had a warm, windy, sunny day. They are still running Table Rock hard with spillway gates open filling Bull Shoals quickly but that may change with Bull Shoals predicted to crest also on 27 May so they must be planning to stop this after Table Rock gets to a normal level soon. We must protect Branson Landing at all costs. Beaver has shut off spillway gates and their level is now steady and not rising or dropping. The White River at Newport is 19.64 and dropping steadily. The four lake system is 62% full at this time so they are heading for 12-feet. It has to be 70% full for them to regulate to 14-ft. but there is not much difference. Bull Shoals and Norfork cannot expect to see much relief very soon. The lake surface water was over 77-degrees yesterday afternoon when I went out for a bit to check things out. The main lake was clear and the creeks were stained just a bit but both were a good color for fishing. I got a report from my friend Patton at Scuba Doo Dive Shop today that the thermocline has formed at 18-feet and there are a lot of fish there and the visibility was very good and he predicts excellent diving this year on Norfork. The spearfishing season starts on June 15th and it is time to start getting ready and making plans. It is nice to have good visibility for a change and I hope it stays that way. I am getting excited already. There are a lot of walleye, crappie and catfish out there. I will start my scuba diving report on this page soon. Scuba Doo is a full service dive shop and is less than 1-mile from Blackburns who has several dive pontoons for rent. It was sunny, hot and windy when I went out for a few minutes yesterday. I do not have as much fishing time as I want with Blackburns being nearly full since early March but that is ok. It is better than being almost empty and plenty of time to fish. I caught my first blue cat of the season while crappie fishing. I had on a 1/16th ounce jig with four pound line when he took off. I got him in but it was a struggle and fun. A few other crappie were caught and that is not bad for the middle of the afternoon on a sunny day. Crappie do not like the sunshine that much. I found a green tree that had just fallen in the water on a steep river channel bank and they were right on the drop-off in about 12-18 feet of water. Other guests are catching top-water fish including bass and temperate bass on early top-water and others are bluegill fishing and catching some nice big ones. I like to catch them too. Norfork has a lot of different species of fish and there is something for everyone. I also caught a big channel on a limb line baited with a bluegill. I grew up catfishing and cannot get it out of my system but do not try very hard. I am just a walleye, crappie, bass, catfish guy and that will probably not change any time soon. I like to go out at the worst time and the worst conditions and see if I can catch fish when it is tough. That is the measure of a fisherman. It is like hitting a baseball. When you hit a home run and you win 1-0 it is better than when everybody hits and you win 10-1.