Bink with a nice one yesterday. 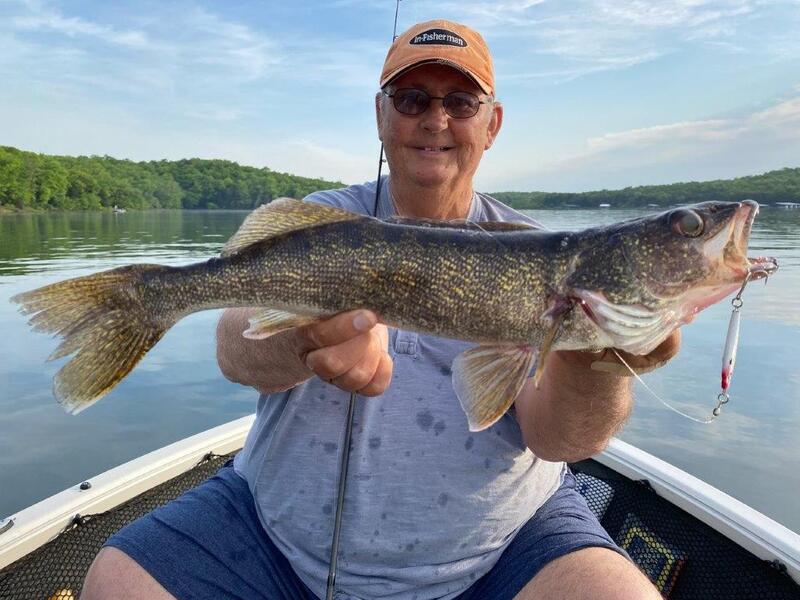 The lake level is 570.93 and has risen 2-1/2 inches in the last 24-hours with several hours of running one generator last night. The White River at Newport is 22.14 and has leveled off. We are to get some storms later today and have been fortunate to miss them so far. Hope the luck holds. They are still running Table Rock as hard as they can with spillway gates open and filling Bull Shoals fast. Norfork is just steadily rising with generation not keeping up with river inflow. The surface water temperature is still in the mid 70's and a little higher in the backs of creeks. The main lake is clear and the creeks vary from clear to stained almost daily. The top-water bite is still the best one early in the morning with small stripers, Hybrid Stripers, white bass and black bass all coming up together. Some Kentucky bass are also with them. More and more bass are joining in after they spawn. The same meat hunters are still taking pictures of dock floors full of dead temperate bass and bragging about it over and over. Maybe after they are all gone they will just go to another lake and do the same thing there. A little catch and release would not hurt anything. Maybe they do not have any grandchildren and do not care if they are all gone. I do. They must be selling them commercially. This is the easiest time of the year to catch fish. Just get out there before sunrise and sling a top-water lure at them when they come up. If you do not know how to drive one of those just get a whopper plopper and cast it past the fish and reel it in. Could not be much easier. It is best to use a clear spook on clear mornings for temperate bass or a spitin image for black bass and using a rod with a little backbone walk the dog agressively across the surfacing fish. I like the smaller spooks but you can throw the bigger one much further. The fish always seem to be just a little further away than you can cast for some reason. I am getting a lot of crappie in under the dock along with big bluegill and catfish. Carp have finished spawning and bluegill are starting. The flatheads that I am catching are not ready to spawn yet. They are the last ones. After taking a few weeks off from using the spoon I am using it again on main lake points in 16-20 ft. of water near the old shore line. Bink is using the spoon also after the top-water bite is over and finding nice fish in deep water at various depths on shad. Casting a crappie jig around brush back in creeks and near docks is catching some fish but the larger ones are on main lake brush in 30-35 ft. of water. Blackburns still has one cabin open for Memorial Day so give Debbie a call at 870-492-5115. We will not charge you too much. The children are all over the pool already. A pool is very important this year with the high water as is a dock. The old shoreline is about 20-ft. deep now and the best lake swimming is from a dock or from a boat.