Scuba Steve with a couple of yesterday's catch. We like these. 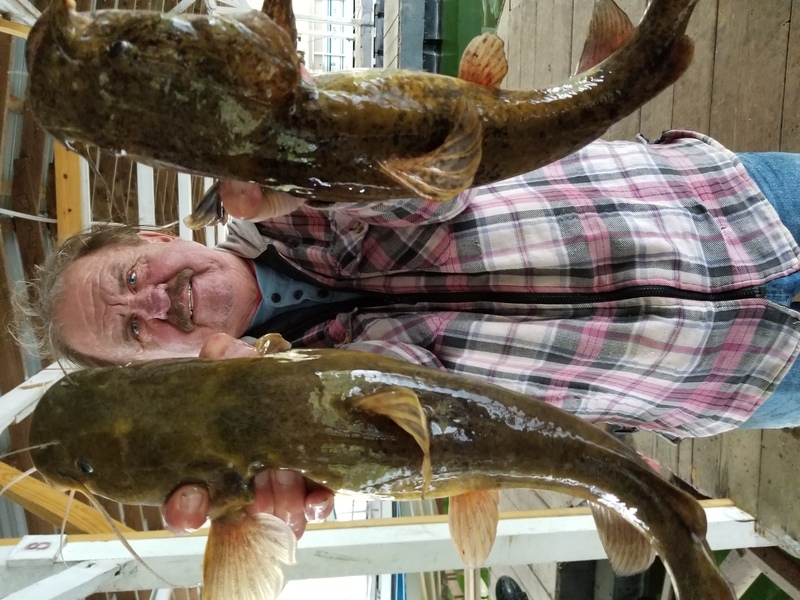 The lake level is 564.14 and has risen one foot in the last 24-hrs with no generation since yesterday afternoon. It is rising 2-inches/hour and the creeks are running hard. We received 1.7 inches of rain last night but it seems to have moved on through now with better weather on the way. The White River at Newport ia 23.76 so they cannot let out much from the lakes. It is to get to nearly 90 this weekend so we will have gone right into summer after this cool weather. The backs of the creeks in the lake is brown but the feeder creeks have been flushed out so many times there is not nearly as much color as there was early in the year. Jim and Marlene Lesniewski found a big school of crappie back in a creek and caught several nice ones. Several other fishermen caught bass and crappie including Alan Lenius and the Martin Brothers. They are good crappie fishermen  and come all the way from Rockford, Illinois and have been coming for as long as I can remember. The Ellners from northern Wisconsin caught some temperate bass and crappie. We are very busy here and almost everyone caught fish. The Grevengoed family just left and did very well on stripers and crappie. They alway catch fish and also been repeat customers for a long time. The Blackburn family is growing but we had to cull a few to get things like we wanted them.  Now we are almost there and are nearly full most of the time. We do not want to charge our friends too much and are in a position not to have to. I have an 8-hook throw line and am baiting it with shiners and bluegill and am catching one or two nice flatheads everytine I run them. People ask what are the best eating fish on Norfork Lake. The answer is walleye, crappie and bluegill are the best followed by Kentucky bass and flathead catfish There is no pollution in the lake so you can make any fish palatable, even gar. My friend Jeremy even likes gar and makes gar balls. I did not even know gar had balls but woulld like all of them removed from the lake.  Others cut the red meat out of temperate bass and like those. My choices you do not have to doctor them up any and they all reproduce in Norfork and are not put and take. I release most fish anyway. My favorite meal in the spring is fried mushrooms, fried potatoes and onions and fried catfish and buttermilk. What could go wrong with that? It sure tastes good though.