Rum Binkley with some nice ones yesterday. 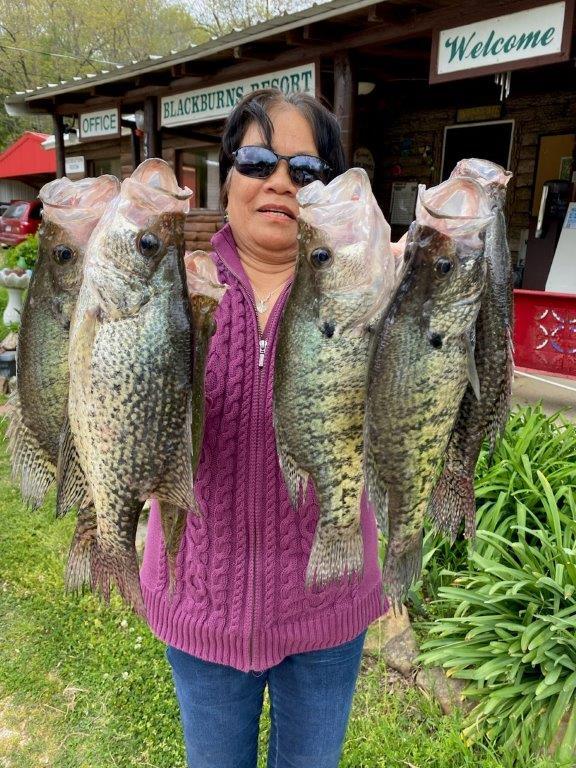 The lake level is 561.17 and has risen 2-1/2 inches in the last 24-hours with about 8-hours of less than one generator running. All of the area lakes are rising except Table Rock which is falling and is at below power pool. Go figure. It rained a little yesterday and thundered last night but we only received about 1/10th of an inch of rain. It is very cloudy with showers in the area now and for the next couple of days. The surface water temperature was 64 in Blackburns Creek yesterday but I did not check it on the main lake. The creeks will rise faster this time of year. The cold fronts just keep coming but are not nearly as cold and are followed by sunny warm days and clear cool nights. The wind continues but slows way down in the mornings and evenings if no front is coming through. The heat of the day brings wind and threats of showers and that will continue through the summer. The lake is clearing with the light generation but a few pieces of wood are floating loose from the shoreline from the rising water. The wind is predominately from the south and is blowing this back into the north facing creeks. Striper fishermen trolling planer boards with balloons (I guess they do not use real balloons anymore but have something similar. There used to be balloons left all over the lake from trollers but not so much anymore) are catching fish on the days that they do not feed on the surface in the mornings. Crappie and bass are with them. They are mostly free-swimming shiners and the fish are not very deep. I do not do this anymore but it can be effective. I like the thump and prefer casting. The absence of the big stripers have really changed the fishery here on Norfork. There is much less competition for the shad and other varieties of fish are now in open water on them with the temperate bass and not on the bank on creek minnows, crawdads and lizards.  The lower numbers of White Bass are having an effect also. They are out there but not nearly the numbers of the past where you could see acres of stripers, hybrids and White Bass surfacing on shad this time of year. A big striper now is 10-11 pounds and it used to be 30-40 lbs. There are high numbers of 5-6 pounds and they are being hunted hard and killed. More and more walleye are being caught and the percentage of ones over 18-inches is growing.  They reproduce in Norfork but I do not know to what extent. I would like to see more of them stocked. Brush in the backs of creeks with about 20-ft. of water are holding some nice crappie and some bass are with them. The lake is clear near the shore and there are bass in some stage of spawn all over. Blackburns Still has cabins at $59/day but stay nearly full all of the time so call in advance. We are having to turn away several people and do not want you to have to pay too much elsewhere. They come and go this time of year so we will try to fit you in. Your first boat stall is free here at Blackburns and all cabins are individual with no duplexes and all have big covered porches.