Tyler Peterson, Nathaniel Lee and Marty Peterson with some nice ones. 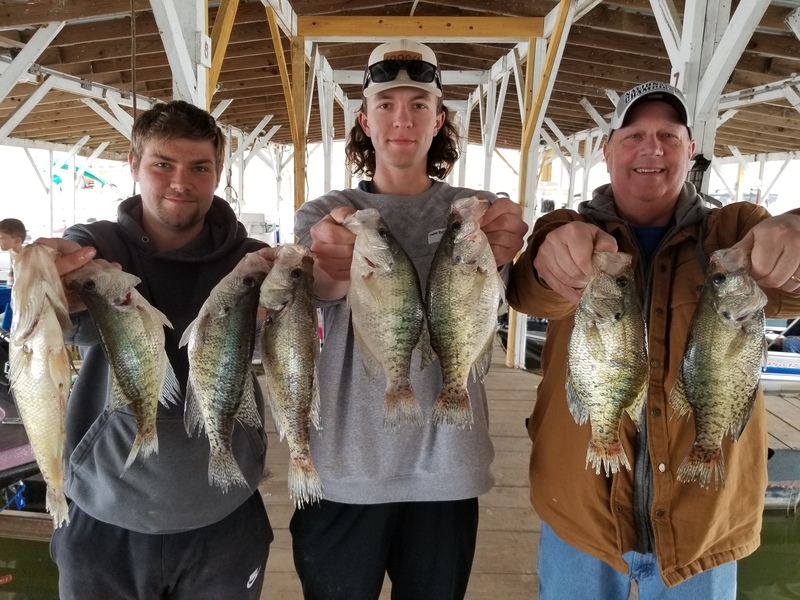 The lake level is 560.41 and has risen 4-1/2 inches in the last 24-hours with just a few hours of variable generation. Not much. The White River at Newport is at 24.47 and there is not much that can be done about the rise at this time and more rain is on the way. We do not have to be in this situation. The surface water temperature was over 63 degrees in Blackburns Creek yesterday afternoon and just a bit lower on the main lake. A lot of things are happening at this time. The lake is rising steadily and shows no sign of slowing, the water is clearing with little generation, the surface water temperature is rising but slower now with the cool below average temperatures and cold nights, the turtles have moved in under the dock as have the big crappie and bluegill, the carp have moved back in the creeks before spawn, the top-water bite is good early morning just before and at sunrise for temperate bass, many bass are in various stages of spawn, walley have spawned and have moved either on main lake brush shallow or in open water on shad, catfish have moved about 1/2 way back in the creeks and are feeding at night and especially in the dark of the moon on live shiners, crappie are all over the place but especially back in the creeks shallow on wood.  They are and will spawn in a piecemeal fashion for a couple more weeks or more. Several big ones are under Blackburns Dock at this time. The steadily rising water have them all mixed up and they do not want to spawn in deep water but will when they have no choice and that is not good. People killing large numbers of crappie everyday say there is no way they will deplete them in Norfork Lake. I say just look at Kentucky lake and see what could happen. It is much bigger than Norfork. They thought the same thing there. They had no limits and then put in a size limit, then a numbers limit and now it is too late and the lake is ruined and the best fishing is Asian carp and businesses are closing down.  We do not need any meat hunters on Norfork Lake. Catch a few, release a few and keep a few. The days of bragging about huge stringers of dead fish are over unless you just do not care. The fishing pressure is just too high and is much more than it was just a few years ago. The Game and fish have done an excellent job in managing the fishery but I believe the limits are too high for most species. Since Norfork and Bull Shoals are both in Arkansas and Missouri they tend to have the same game and fish rules and they are hard to change and are very different fisheries.  It will be interesting to see what Game and Fish come up with on the proposed bass regulations and stripers stockings. The larger stripers tend to die off in prolonged high water on Norfork in the summer but do not in Bull Shoals. Many people want stripers in Norfork but many do not in Bull Shoals but stripers have been stocked in Bull Shoals by both Arkansas and Missouri (most by Missouri) and will start to show up soon. Walleye have increased in desirability in both lakes after black bass which are by far the most desired. Crappie are right up there after bass but walleye are gaining on them. If they quit stocking stripers in Norfork I hope they increase hybrids. I do not fish open water much anymore but they are fun to catch.