Tom Kelly with some nice ones released under Blackburns Dock. Tom is a very good fisherman and also a true sportsman. 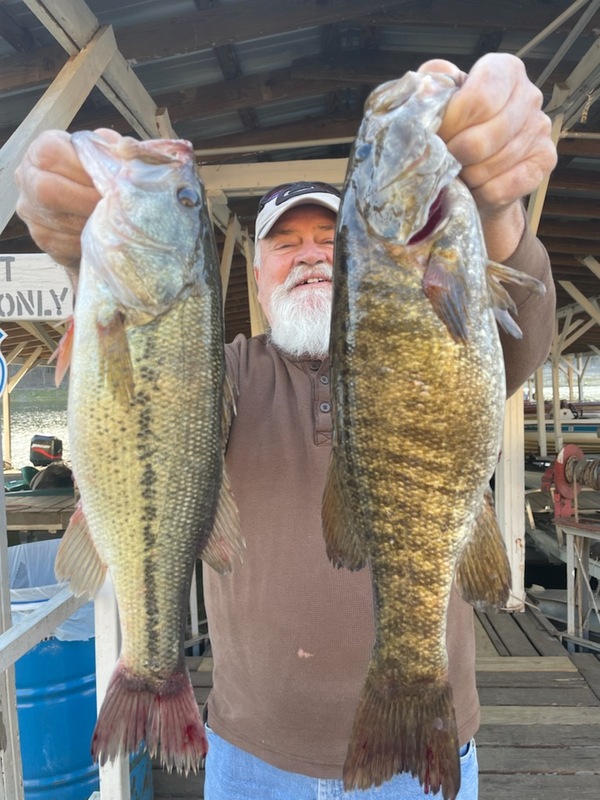 The lake level is 559.74 and has risen 3-inches in the last 24-hours with five hours of light generation. All of the area lakes are rising except for Table Rock which is dropping. Branson Landing must be taken care of at all costs no matter what happens elsewhere. The surface water temperature is in the low 60's and rising with the crappie and bass spawn in full swing. The lake is clearing with the low generation and there is some sight fishing back in the creeks for bass on beds. It would have been more clear without the incessant wind but it did blow the plankton and bait fish into the south facing creeks yesterday and there was a good top-water bite this morning after the warm night. It was mostly White Bass but a few bass were in there with them and some very small stripers. It has been slow coming and sporatic but is here now. People that cannot usually get very many fish will catch some now if they get out just before sunrise. Be there by 6:AM and have on a spitin image for bass and zara spook for others. I like baby spooks the best but the fish always seem to be just a little farther than I can cast them, so a larger one can be used. The clear ones sparkle in sunlight and a bone colored will also work on cloudy days. You can also wing a spoon at them and hop it back to the boat especially if they go down a bit. If you lose them cast the spoon as far as you can and hop it to keep it from sinking too fast. Turn a few degrees in one direction and keep chucking until you have made a full circle. You will have a better chance of finding them again when they are out of sight. The big spook can also call them up from a few feet down even if you cannot see them so do not give up too quickly. I have seen acres of fish surface in Panther Creek on Mornings like this in the past but they are just not there anymore in nearly the same numbers. White bass and Large Stripers especially. This is a good time to catch and release as they are not coming from deep water and are not stressed nearly as much when caught unlike fishing deep for them in the summer. Rain in coming now and tonight and early tomorrow so the lake will keep rising. Catfish like rising water and small moons. It is not small now but is getting smaller and the fishing will get better and better. I like catching those flatheads. The winners of the Bassmast College series caught a total of 30-Lbs 3-ounces for a two day total. They caught 19-lbs the first day and 11-lbs the second. I anticipated a little less the second day with the warm sunshine and heavy wind but they did quite well and did Drury proud. It was really busy with a lot of people fishing this area yesterday. There is one more today and then it is over and the lake can settle down. It would be nice if it would stop rising but that is too much to hope for. We could get some serious rain out of this one. Some crappie are back on the main lake brush but more are back in the creeks spawning at various stages. Some spawned out bass are back in open water on shad but most have not finished spawning yet. Bass spawn into the summer on Norfork especially the Kentuckies. This is a good time to be at Blackburns and we will not charge you too much. Rainy days are a good time to set out on the coverd porch, play cards and watch the rain or rig up fishing poles. No need for umbrellas here. One bedroom cabins are still $59/day and your first boat stall is free. Veterans and Police load on up and come on down. We have a lot of boats to rent and at the best prices.