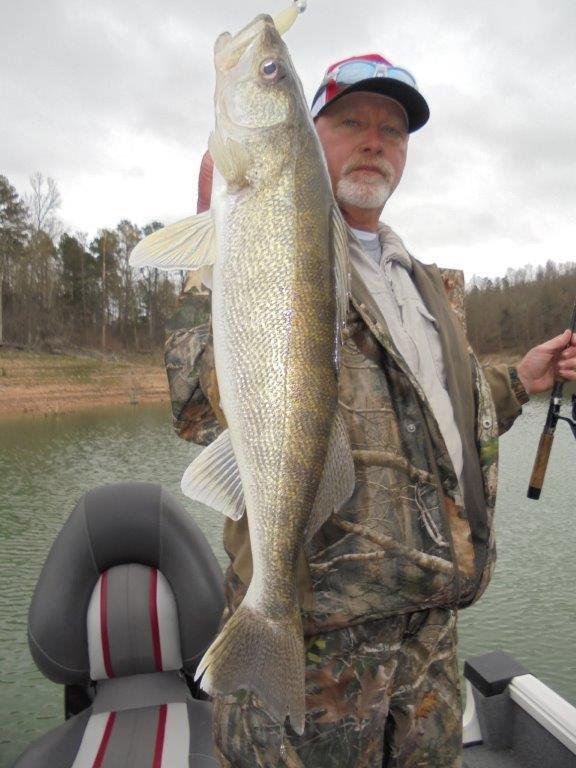 The lake level is 554.54 and is the same as at this time yesterday with one generator running continuously. We received 1/2 inch of rain yesterday and if they quit generating it will rise again. The White River at Newport is at 21.98 and is stable now but they are still letting out a lot of water. The surface water temperature was 56 yesterday about noon when I went out in one place and 57 in another later in the day. The water is stained a brownish green and you can see your lure down about three feet. I caught one bass on top-water chucking a spoon at the surfacing fish and then went crappie fishing. It started out slow and then I caught three about 11-inches long and the wind shifted so I moved and the water was 57 on the bank with the lower wind. I was using a Bobby Garland Blue Ice swimmer. It is 1/2 inch longer than the baby shad and has a very small paddle tail on it and works a little better for me when vertical jigging. I fished for an hour and caught no more and then caught five in about 5-minutes casting the jig and letting it sink into the brush. All of the fish that I caught were either in brush or near it and in 18-ft. of water. None were deeper than 20-ft. and most hit on the drop. I am still surprised that many crappie are still on main lake brush in the middle of april but they are. It has to be that the water has just not warmed enough and the cold fronts just keep coming through. I would like to see them spawn while the water level remains fairly stable. I caught no crappie larger than 12-inches but Don and Keith Katashuk did. They caught a couple of big ones but were fishing in different places than I was. They are very good fishermen and good friends. They caught some bass also. Bink is catching about everything on top-water now including walleye and then switching to the soft plastic. The fish come up almost everyday now and especially after a warm night. Many are small bass but not all and  some white bass are mixed in. There used to be acres of them a few years ago but not nearly as many now. We could get strong storms tomorrow and are in the bullseye but we will see. This area has a way of missing most of them. Little Rock area did not miss them last night. Blackburns remains nearly full but people come and go and we should be able to work you in. Come on down and we will not charge you too much and your first boat stall is free. We especially welcome Veterans and Police.