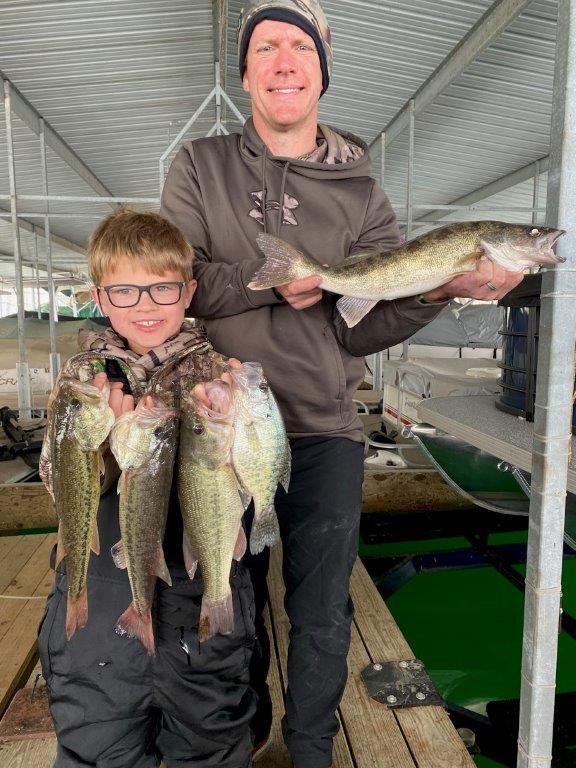 The lake level is 554.81 and has dropped 3-inches in the last 24-hours with both generators running continuously and three spillway gates open just a bit adding about 1/3 generator. The White River at Newport is 22.36 ft. and they are doing a good job of letting out water. I hope they keep it up. There is brownish water in the middle of the river channel heading south and is now past Robinson Point but it is not a bad color but does have some small debris from up north. Most major creeks are more clear as the water from the north is going by the mouths of the creeks with the current. The local runoff has settled out fairly quickly. It could have been a lot worse. The surface water temperature was 57+ yesterday and it was cloudy with a little rain but very nice today and it should raise the water temperature in the sunshine. Blackburns has several groups of fishermen in and they all caught fish. The south wind had blown the plankton back into the south facing creek and bait fish were with them attracting predator fish of all kinds. The crappie fishing was a little slow but all of a sudden in the middle of the afternoon fish started coming up. Bass, walleye and stripers were all together and bit for about an hour. It was very exciting for the people that had not been here before. It was not the usual early morning, just at sunrise, top-water bite but the shad were just in the shallow water. The big female bass are pre-spawn feeding but I am not seeing any males on the banks yet making nests. The crappie will be first and then the bass. I hope the water level stays fairly constant for the spawn. It might if we do not get any big rains, the Corps Of Engineers keep generating and drop the level back into the power pool, and the power company stops generating like they usuall do. It is hard to tell but when April 15th comes the rules change. Do not be afraid of casting a spoon and any fish that you happen to see surfacing. When the actual top-water bite starts later, you can use your Zara Spook to draw the fish up that are not surfacing but not so much now. Bink reports he caught top-water fish for several hours yesterday on the spook in Big Creek. When the nights only get down into the 50's for a low they come up in the mornings and when the cold front comes through with lows in the 30's to low 40's they do not. This is the first time I have seen walleye come up with the bass.  Bass, crappie and walleye are the best bite now with some stripers. Come on down to Blackburns. We will not charge you too much and your first boat stall is free.