John Bornhop with a nice hybrid striper caught while crappie fishing on a Bink's Spoon. Released under the dock. 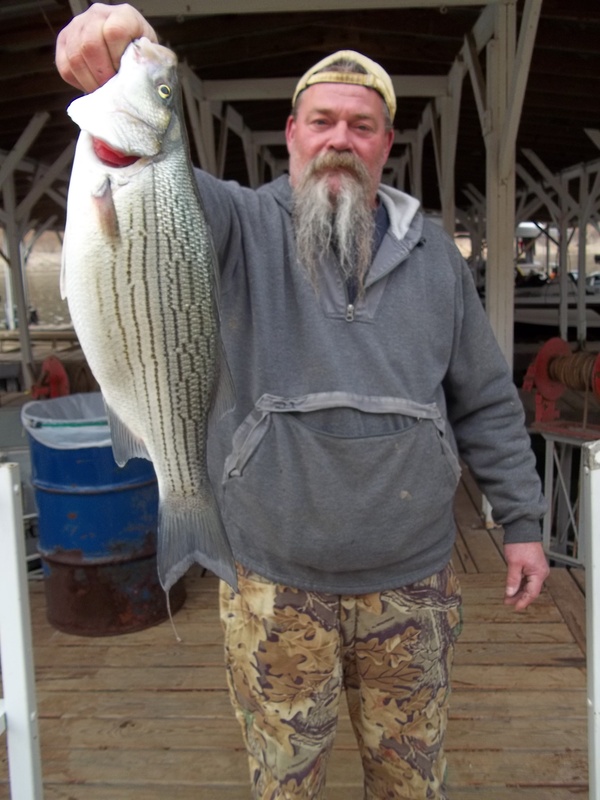 The lake level is 553.55 and has risen over 2-inches in the last 24-hours with generation about 2/3rds the time. We are approaching the power pool of 553.75 where the generation control goes back to the Corps of Engineers. The White River at Newport is at 20.26 feet and I wonder why it could not have been at this level since the Southwest Power took over. The surface water temperature is in the low 50's and the creeks are stained and the main lake is also stained but not as much.  We are at a good level now but are going into the spring too high. 560 is when we start to have problems with day use access and one big rain could get us there. There has been no effort to drop the lake this winter and they are just trying to maintain this level. It has been cold, cloudy and windy with continuous cold fronts moving through but that should change by about tuesday when it is to get in the high 70's. When that happens the warmth is usually accompanied by storms and we have been very fortunate to have avoided them for a long time. Bass are pre-spawn feeding now and are the best bite. People that cannot kill stripers now because they cannot catch them are turning to bass and that is why I oppose the changes proposed by the Game and Fish for Bass regulations. I know that there are a lot of small bass including Kentucky Bass in the lake but I am finding no fish that are skinny and there is little competition for food with shad, crawdads and creek minnows plentiful and no shad kill this year. If they take the size and numbers limit off of Kentucky Bass the meat hunters will eliminate them. They are easily caught and provide fun for novice fishermen when other fish are hard to catch and grow to about two to two and one half pounds. Also killing largemouth bass that are 13-inches instead of 15 will in the long run will make for more larger fish but many less medium fish and harder to catch. A large percentage of bigger bass have been caught before and released. I do not see an over-population of fish in Norfork or any signs of it. I would like to see many more walleye stocked as more and more fishermen are coming here to target them instead of the stripers which are either over-harvested or die off in the heat of the summer. They are getting smaller and smaller and they keep killing them and bragging about it. It looks like the proposed new law raising license price for out-of-state guides will go through on July 1st of this year. It will keep out some of the ones who are making a living on Arkansas waters with a residence in another state. A $2,500 license fee will scare some of them off. We have plenty of guides. Catch a few, keep a few and release a few.