Scuba Steve with the fish of the day here at Blackburns. 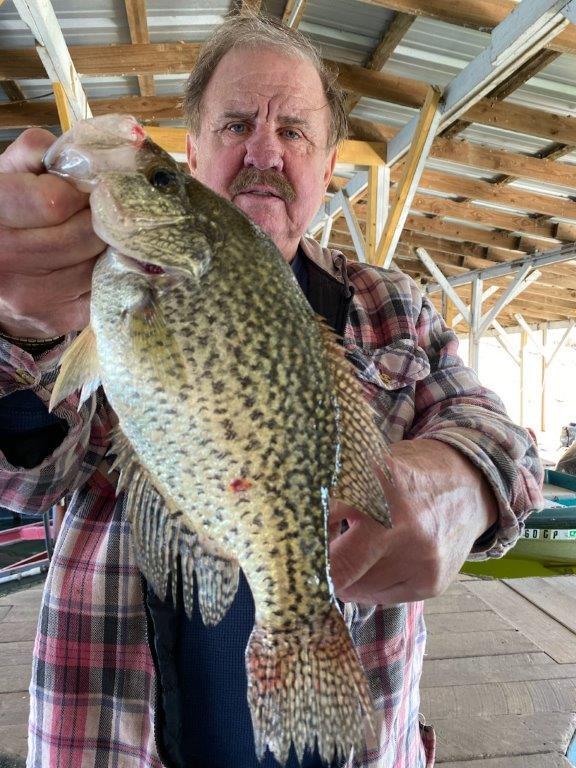 The lake level is 553.06 and has risen 2-3/4 inches in the last 24-hours with no generation for three days. With the rain coming next week it looks like we will get back out of the power pool. We are heading into spring rains and there has been no effort to drop the lake for the winter. Everytime it gets down to the power pool of 553.75 they quit generating and let it come back up again almost like they want high water for the summer. With the price of oil you would think they need nearly free electricity somewhere in the transmission area but I guess not. They like to hold water until it gets very high and then bypass the generators and open flood gates. It was a cold blustery day on Norfork yesterday after the rain with white caps and hard to get out of. The people predicting spring might have been a little premature but the Dogwoods started to bloom anyway down by the lake and that is usually a good sign. I did not see any redbuds blooming yet and they usually bloom first but they also show up around town in the higher elevations in the sun rather than down by the lake.  The surface water temperature was 51.6 on the main lake and the water was stained from the wind. I went back in a creek to get out of the wind and caught a couple of nice crappie and came in. This weekend should be better and then good chances of rain for the next three days after that. It looks like the severe weather will go south of us again. Bass fishing is the best right now as the crappie have slowed for a couple of days. The trollers are catching some small stripers and white bass with a few hybrids thrown in. The people fishing after dark for stripers are catching fish but very few over 10-pounds. Last night was the full moon and that bite will diminish with the moon and then the first part of April the top-water bite will begin. It will be sporatic until the 15th of April when it always seems to be in full swing. This is when spitin image and poppers work very well for bass and spooks work for both bass and stripers. Casting spoons and hopping them back to the boat also works. Get a 6-1/2 ft. medium heavy rod and learn how to walk that dog. Limber rods do not work. Novices can use the wopper plopper as all you have to do is reel it in and do not need to know anything about technique. A person that can work a spitin image can catch a lot of bass in the spring and it is fun to watch them hit the lure and settting the hook instead of just dragging stuff around behind the boat in a rod holder but they both work.  A friend gave me a tackle box full of old lures and I put them on a peg board in the office on display and they kept disappearing so I contacted Larry Seaman who specializes in old lures and fixes my stepped on rods and fixes my reels (I am too cheap to buy new ones) to see what he could do. He can fix about anyting and make it look like new.  He made a beautiful display of the lures framed and under glass and I traded him the rest of the lures. Some were the old wooden lures and the old Splune silver spoons. They made them by hand until the 1950's until Acme bought them and then they were mass produced and called Kastmaster because they were made of metal and you could cast them far.  Uncle Josh bought them about 20-years ago and now they are made in China and not nearly as good. I used to use the Dare Devil with Red Eye spoon for Pike in Minnesota and also caught White Bass in the Missouri River in South Dakota on them a long time ago but never tried them on Norfork. I use the Bink's Spoons exclusively now as he has been producing them for about 25-years, continually makes improvements and I catch a lot of fish on them.  Larry knows all of this stuff that I have never heard of. People really enjoy the display in Blackburns Office and none have gone missing since. It is getting very busy here at Blackburns with people taking advantage of the best prices on both cabins and boats in the Ozarks and your first boat stall is free. We have no duplexes and all of the cabins have big covered porches. All of our cabins are open now and the one bedroom ones start at $59/day and there is no price increase this year. There have been many improvements and you will like what you see when you get here. Furniture Depot in Mountain Home also has worked with me to buy about 20 new mattresses this year and now most of them in the resort are new or only a couple of years old. I highly recomment these fine people also. It is good to have friends.