Dave Titus with a couple of pretty good ones yesterday. 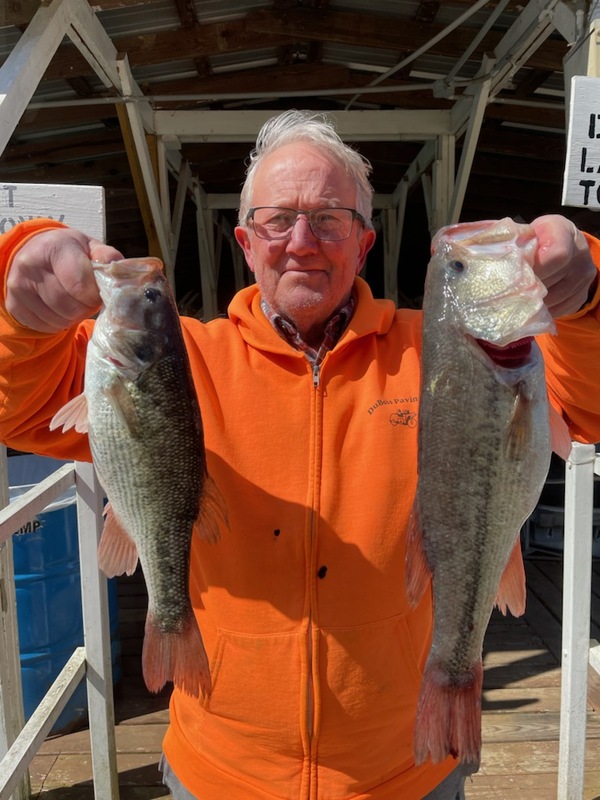 The lake level is 552.92 and has dropped over 4-inches in the last 24-hours with both generators running continuously. The White River at Newport is at 20.39 and dropping but they are still letting out a lot of water. It was cloudy and misted rain a few times yesterday and did not warm up like it was supposed to but was not bad for fishing. I had to check out a rental boat for a customer in the morning so was able to get out for a bit before resuming starting up cabins. Debbie reminded me that if I not get the utilities turned on  she would not be able to get them ready for friday when they mostly fill up. It looks to be a busy spring despite the inflation and high gas price. Most of that can be offset by staying at Blackburns and not paying too much and not paying for your first boat stall. I thought about buying a new $2,000 Live Scope for my boat but decided to buy new cabinets and beds for the cabins instead. I can catch enough fish without one anyway. I know where the brush piles are because we put most of them in. If someone wants to buy me one just give me the money instead.   The surface water temperature was 49 degrees and the water was still stained and I could see my lure down just a couple of feet. I caught nothing for about an hour and then the bass and crappie started biting and I caught my self imposed limit of five crappie and two bass and came in and got to work. Some of the crappie were about 12-inches but a couple were very large. I was casting the grub past the brush and letting it sink down into it and they were in 35-ft. of water and hitting on the drop about 15-20 ft. down. Bink, Dave, Mike, Tom also caught fish. They were using spoons, creature baits and small worms.  It is warmer today already and much warmer is on the way but chances of rain. Everytime the water tries to warm it gets cold and cools down again. Maybe this time it will stick. Just keep away the storms and keep the lake dropping and we will be fine. We are at a good level now but do not need a big rain. The ground is completey saturated and needs to dry up a bit. 13.74 pounds won the Youth Bass Nation Tournament last weekend. I though it would be more but that is still pretty good. Norfork Lake fireworks fund raiser tournament is the 26th of this month. Another good cause and lake promotion.