Mike Eakle with some of yesterday's catch of Norfork Lake crappie. 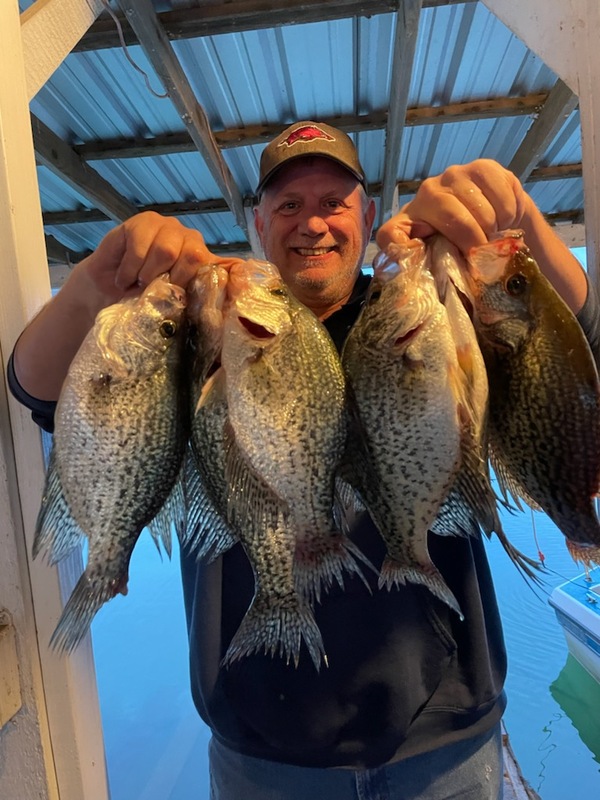 The lake level is 554.18 and has risen an inch and one half in the last 24-hours. They were running one generator and then completey quit when it rained and then are starting up both again. We received over one inch of rain here at Blackburns but the creeks are not running this morning. There was a lot of lightening but I know of no damage in this area. A tornado was reported in Sharp county south of us. The ambient temperature is now in the 30's and it is cold with more to come and it is to get down into the teens for lows later this week before it warms back up again. The White River at Newport is at 21-feet. They are letting out water but we just cannot seem to make any progress on dropping the lake. I would really like it to be around 547 going into the spring rains to give us a surge capacity but we cannot seem to get back to the power pool of 553.75 and when we finally did once they quit generating. Either way Blackburns will be ready for what comes but it would be very nice for everyone to keep the level below 560 all year. The surface water temperature was 53 when I went out yesterday and the main lake was clear again in this area and I could see my lure down about 6-feet. The fish stared biting about 4:PM and then mostly quit before 5. Mike caught some good ones on our new brush piles and I took five crappie and one bluegill to Tom Kelly's trophy pond. The weather was very comfortable and then it started lightening from the southwest after dark. The water temperature is not going to rise anytime soon but we are higher than usual at this date. Our normal ambient high is 57 and it would be nice to have that now instead of getting ready to drip water to prevent freezing up in the cabins. Blackburns is nearly full but I am not opening up anymore until the 15th and that depends of the long-term forcast. If you are staying at a place where you are nearly the only customer you are paying too much so stop by here on your way home and check things out. You will be welcome here and we will not charge you too much. Yes Blackburns is the fishing place and especially welcome Veterans and Police and your first boat stall is free. Overall fishing is just fair and the fish are moving all over the place. The creeks will cool down before the main lake. Trollers are catching some stripers and hybrids but most are small and they are working hard and burning a lot of gas to find them. I wish they would release more of them but they refuse. Meat hunters. You gotta love em. Catch a few, keep a few and release a few.