Caught fishing with Bink's Guide Service yesterday on both the spoon and creature baits on a steep bank in about 25-ft. of water back in Big Creek. 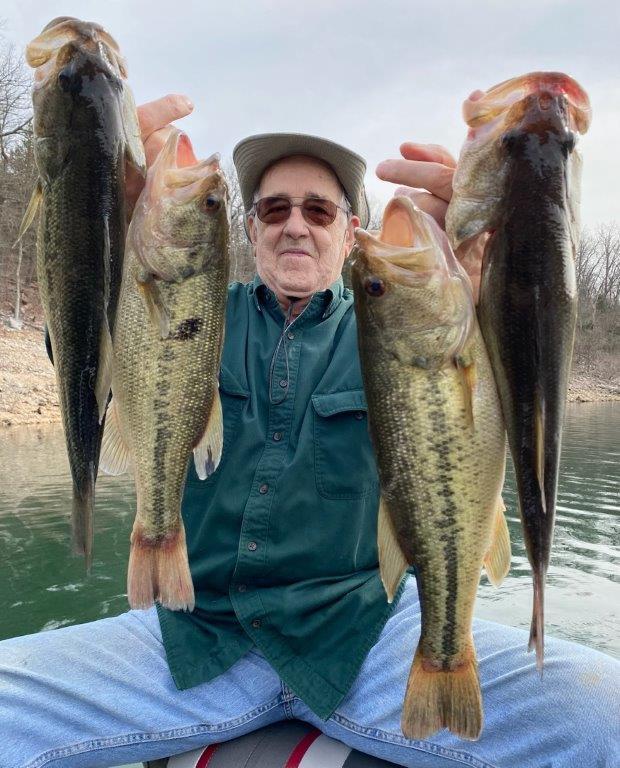 The lake level is 554.12 and has dropped 1-inch in the last 24-hours with one generator running since late last night. The White River at Newport is 21.52 and all of the area lakes are approaching power pool except Beaver and it is already there. They can keep up this generation rate until April 14th if they want to but always seem to cut way back when Southwest Power takes over. The level of 560 is when people start having problems with access.  We have had a pretty good run on dry days and a lot of water is gone and things are much better than they could have been and things are starting to dry up a little.  We are a little less than 2-inches over the average rainfall for this year so far. We will see what sunday brings with rain for sure and some storms. It is to get cold again with a possibility of more winter later next week but not too bad. The normal high is 56. I had 54-degrees in Blackburns Creek and between 50 and 51 on the main lake late yesterday afternoon when I went out. It went from 48 to 50+ in just a couple of days and that is about as fast as I have seen it rise. I went to a couple of new Blackburns Brush piles back in the creek and caught my limit of five crappie and they were bigger than I have been catching and were in the 12-13 inch range and then just at sunset went to my favorite bass bank part way back in a creek that the wind was blowing into and caught several 2-3 pound largemouth on a creature bait on a steep bank on the bottom in about 25-ft. of water coming back to the boat on the drop-off.  I could not catch anything off the bank or on main lake brush.  They were all released on site as they are getting ready to spawn but not there yet. The White Bass are just starting to spawn and are moving back into their normal march areas. They are about on their normal schedule. I again went around the shore where I usually see big bass making nests when the water temperature is above 55 and saw no evidence of that yet. The water was very clear again especially near the shore. I could see the bottom in about 6-feet of water. It is cloudy now and should be a good day for fishing until the wind picks up and it will. I just have to get used to these march cold fronts but does not mean I like them. It is my least favorite month. Crappie bite for about 30-minutes and then get lockjaw for several hours but always seem to stop biting for good about 5:PM. Blackburns still has the best prices on both cabins and boat rentals and your first boat stall is free. We like Veterans and Police.