These are the size of crappie that I am catching. They have moved up above the brush  5-7 feet down and are easily spooked. 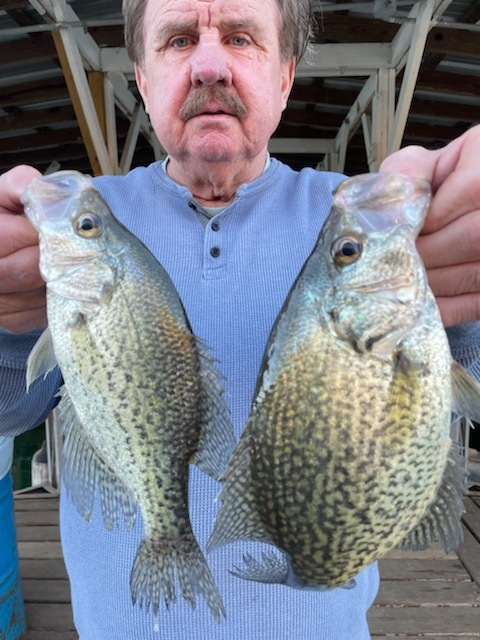 The lake level is 554.27 and is down just a bit from this time yesterday with generation about 1/2 the time. The White River at Newport is at 22-feet which means they are letting out about as much as they can and not cause problems downstream. The surface water was 48-degrees yesterday on the main lake and 50 in Blackburns Creek in the afternoon and the water more clear in the creeks than on the main lake but both are good for fishing. If you can find 20-ft. water with brush back in the creeks there will be crappie on it. Crappie, bass and bluegill moved in under my dock yesterday and they do not usually do this until late March. The warm weather making the water heat up is changing things almost daily. It is to cool down with highs back into the 50's after the rain on sunday with another cold front. Lows are to get to back below freezing again. Saturday looks to be a good day to catch some fish. Bass, crappie and small stripers are all coming in but not in high numbers. I am not seeing many fish coming up but it is time for White Bass to move in the backs of major creeks. Stripers will move to their spawning banks on main lake flats late in the evening in a few days and it should hit it's peak by about the 15th of this month. I do not fish for them anymore but used to and really enjoyed the night bite in both march and november when we caught some really big ones. It was very popular several years ago and you had to get out there in the afternoon to get the good spots. Not so much anymore. March they simulate spawn and november go to the same banks to feed just before the full moon. It lasts until a few days after the full moon and then is over. March is usually better than november and you can count on this happening in march.  Bink will be back in Big Creek casting his spoon and hopping it back to the boat for White Bass soon. I know exactly where he will be. They used to fill this one bay with fish but not so much anymore but they are making a comeback after a die-off about three years ago and more and more are showing up. A lot of people like to fish for them because they are so easily caught. I opened up four more cabins and the cleaning crew is working hard to get them ready and they are filling up as fast as they get them on line. I will save the last five until after the 15th of the month. One cold front which is common in early march could cause a lot of plumbing problems and I get enough of those anyway. I lived with my Uncle Walter when a lad and he owned a plumbing, heating, air conditioning and electrical company and I worked with him before and after going into the military and the knowledge has sure come in handy. I miss him everyday. It is busy here at Blackburns and the price is right.