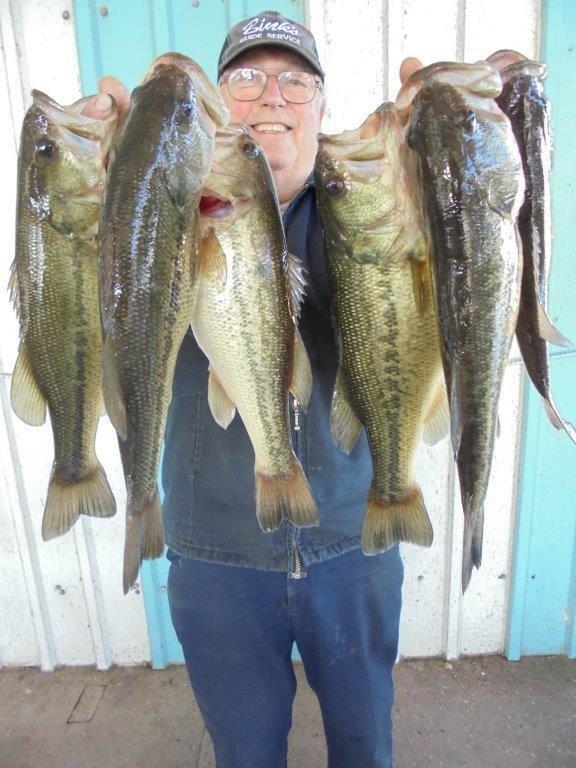 The lake level is 552.62 and is the same as this time yesterday with three hours of generation. The White Riven at Newport is still 9-ft. and they are still holding the area lakes up high even though they could be dropping them. I have the dock and parking set up for high water again this year and will be as ready for it as I can. You can always get to the dock here at Blackburns but may have to drive a little to get there. We always have parking. High water does not hurt fishing much unless it all comes at once like in 2017. It just changes the way and where you fish. I hope we do not have to go into high water mode but they are doing nothing to prevent it. Dropping the lake in the winter would give us a much better chance but they refuse to do so. We are at a good level now for launching, parking and fishing and I guess we have to take what is served to us. it is just too bad the lake is not managed better. It would not hurt anybody down stream. It was a beautiful day yesterday with warm temperatures, high pressure, light wind, sunny skies and a full moon which are all a recipe for not the best fishing but that did not matter as it was just good to be out there in the sunshine. The water looked more stained but I could still see my lure down about 5-6 feet and I suspect the bright sunshine had a lot to do with that. The water surface temperature was over 48 at 3-PM and just about 45 after dark and I suspect the sunshine had a lot to do with that also. That is a big change for a deep lake and I have seldom seen that and I was fishing in the same area. There will be no shad kill this year. A kill makes for better fishing but not having one is better for the fish. I would rather have them well fed than easily caught. All of the fish that I am catching are fat and healthy looking. The crappie are very finicky. They go for several hours biting very slowly and then bite fast for a few minutes and then quit again. There is a bite early in the afternoon  and then they quit and then another in the evening and then they quit again at dark and I mean quit. Try to stay in the shade on brush the best you can. Sunshine straight down on the water is not good for me except for bluegill and I am not catching any of those lately. Go against the wind with your trolling motor and use it as sparingly as possible. If you have anchor or spotlock do not use it. They hunt too much and spook the fish. They are ok if you are trying to stay on red meat fish in open deep water but not for crappie or bass in shallow water. I consider 25-ft. to be shallow water. I do not use a spoon in water less than 18- 20-ft. and switch to the jig. When the fish are biting on the drop stay away from the brush and cast the jig past the brush and let it sink down into it. Otherwise jig straight up and down into the brush. If you are using a slip float and live minnow set the minnow depth 6-ft. farther down than you can see it and adjust it deeper if needed. They will come up to get it better than going down.  Bass will be in the same place but usually deeper. Harvey Hall would go to one of his brush piles and fish for a few minutes and if he did not catch a fish or maybe just one he would move. He caught more fish than me but I prefer to keep fishing where I know the fish are there and probably stay in the same place too long. I do not see how many fish I can catch anyway and fish where the big ones are even though they are not biting. I do not guide and do not feel pressure to catch big stringers of fish for the paying customer. My self imposed limit is five and then I switch to bass or walleye. I caught four crappie and two keeper bass and came in after dark. Nice day and makes life almost worth living. Catch a few, keep a few and release a few and leave the rest for the tourists. They are paying the out of state licenses and pay for the fish stockings.  With the current gas prices it may not be the best choice if you are only fishing for food especially if you are a troller. My boat uses about as much gas as a Naval Destroyer uses diesel but my Hummingbird 4-ID fish finder positively identifies fish. At least that is what they told me in 1986. I am still trying to figure out how to run it but I catch a few anyway. I would buy a livescope but they cost more than my boat 15-years ago which is also a 1986 and I spend my money fixing up the resort, what little there is with Blackburns low prices. I probably could not figure out how to use it anyway but pretty much know where the fish are. I miss Harvey. That old boy could catch crappie. The two best crappie fishermen on the Lake were Jay Smith and Harvey Hall. Harvey died and Jay retired. There are a lot more crappie now for us novices. They never fished any brush piles but their own and worked hard putting them in. Others should do that. I do.