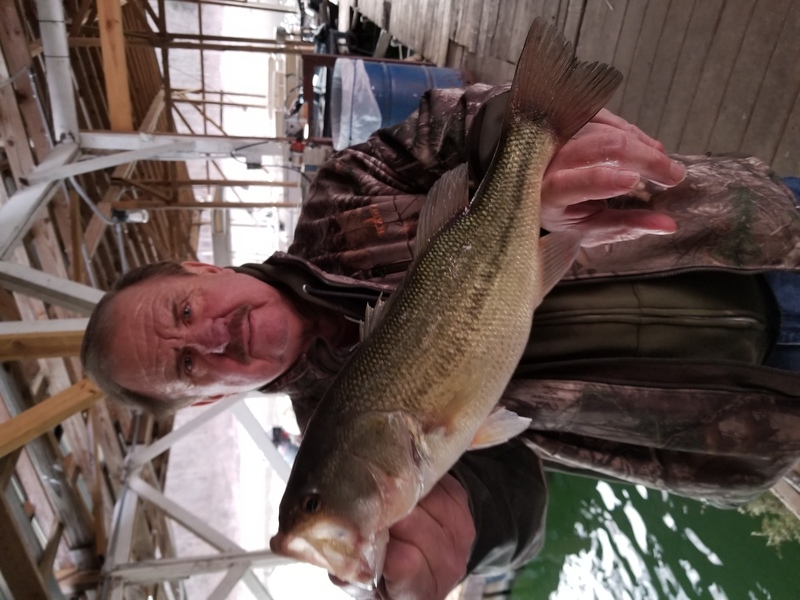 The lake level is 552.42 and has risen 1-3/4 inches in the last 24-hours with no generation. They just started. The lake should not be rising this time of year. The White River at Newport is 8+ feet. The surface water temperature is 47+ and the lake is fairly clear with a greenish tint and you can see your lure down about 5-feet. I continue to fish brush on main lake points during the afternoon for crappie and bass in about 25-feet and then move to behind the brush part way back in the creeks in little cuts near the shore. It is cloudy today and the fishing should be pretty good after several sunny days. The cold front comes in tomorrow and the ambient temperatures are to drop drastically but only for a short time and then warm back up. The average high is 49 and rising. It is to be windy for the next several days. If it is going to go down it is usually early AM until it warms up and then again in the late afternoon when the temperature starts to cool. During the day it is gusty and swirling down the river channel swings. There is a good chance of rain later next week. Spoon or jig the brush during the day and cast the grub to the shore and work slowly back to the boat near the bottom in the evening. Some are right on the bank and some are in about 10-15 ft. of water but they may be following the lure before they hit it. Watch for the twitch in your line and set the hook. I am not sure if the same fish are moving from brush to the bank near sunset but I think so because I am catching few on the bank during the day except for smaller Kentucky Bass. When the Game and Fish did their survey on what people coming to the lake were fishing for it was overwhelmingly bass, followed by crappie then anything they can catch and then striped bass at a distant 4th. That is not the case now. Most of the fishermen are guides competing for very little business in the off-season or fishing with their family or friends. It is very competitive and most of them are fishing for stripers and killing a lot of smaller ones. The very few near 20-lbs that are left are being killed everyday and these guides are good at catching them. Most are trollers. The umbrella rigs drug through schools of shad are very effective and they put out 6-8 of them off each boat. The larger ones that are left should be gone soon but several in the 5-8 lb. range are still here but the class of 2020 is absent due to covid. It will be interesting to see what Game and Fish does about it in the future if the water is held high again this summer and there is a fish kill in August. I suspect if there is one it will not be nearly as bad as previous years as it affects the big fish most and they are already gone and the shoreline vegetation is already dead due to so many years of prolonged high water. Decaying green vegetation increases the BOD and causes low dissolved ozygen and the fish to go into the deep bubble and later die due to the stress. They are ocean fish. The striper kill affects Norfork the most and I suspect there will be changes in the fish stockings in the future. If they stop stocking stripers I hope they increass Hybrid Striper stockings as they are not affected and even though they do not reproduce, people really like catching them. What I would really like is more walleye stockings and also quit holding so much water for so long so the stripers do not die off. At least the walleye reproduce. Others are just semi put and take but used to get really big. Increased fishing pressure is not helping things either.  Other area lakes could get our Norfork Stripers and that would not be good. It is already starting. Blackburns is the headquarters for Police and Veterans. We like them.