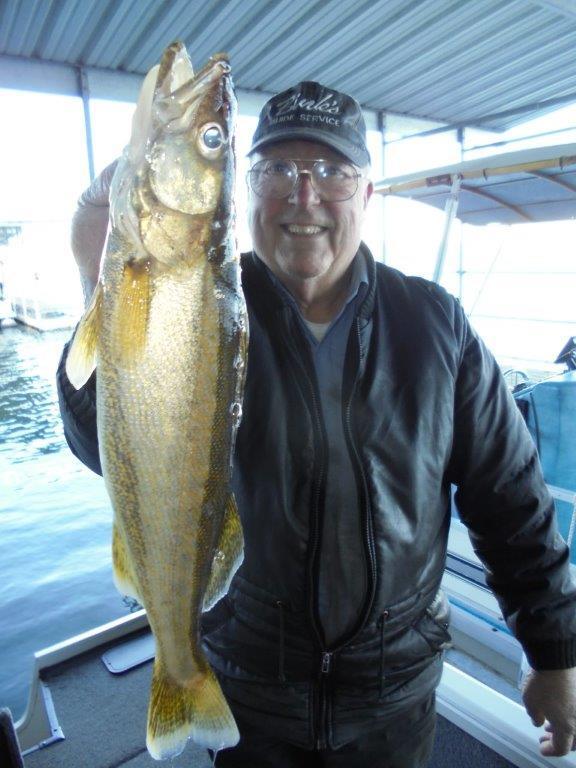 The lake level is 552.26 and continues ro rise slowly with very little generation. It rose 1-1/2 inch in the last 24-hours with 2-hours of generation. The White River at Newport is 8.9 feet and dropping. There is no effort to drop the lake level for the winter. The surface water temperature was 47 degrees, it was sunny and warm with an ambient temperature in the 60's, a little wind from the southwest, but not bad.  I saw a couple of other boats dragging umbrellas around for red meat fish but other than that not much action on the lake. This is a good time of year for peace and quiet. The last few years December can be the coldest month but this year it was January again with not very many warm days and several cold fronts followed by clear cold nights. There are always some warm days in February with the longer days and average highs increasing. The lake water temperature seldom drops after the first week in February and it starts creeping up. It is better to start getting dark at 6:PM than 5PM but the ambient temperature still drops fast at sunset so no matter how warm it is during the day bring a coat. The snow cooled the water a couple of degrees but it has warmed back up now. Even with the warm weather the snow has been slow going away but is mostly gone now except for the plowed piles. I am not much into snow and ice. The lake is pretty clear and you can see your lure down 5-6 feet. Yesterday it was more clear in the creeks than on the main lake and that changes almost daily. Bink is catching more walleye than anybody I know at this time and they are with the white bass and small hybrids but are on the bottom. I am not catching any but am not fishing the open water on main lake flats but continue fishing for bass and crappie in brush early and then on steep banks just inside the brush in the late evening until dark. I am not catching as big of fish now as I was a few days ago. I may have to switch tactics if that does not change. That is why you have to be out there almost everyday to stay on top of things. What is reported one day may be worthless a couple of days later with the wind, air pressure, moon phase, and amount of sunshine constantly changing. That is what makes it fun. Release some of those walleye as it is approaching spawn time and we need more of them in the lake. They have a high mortality rate with most people killing almost every legal one they catch. Someone releasing a 20-inch walleye is a true sportsman. We do not have nearly as many of those as we do meat hunters but the numbers are increasing and that is good with the greatly increasing fishing pressure. Norfork is no longer uncrowded and the unspoiled theme is also going away with the water clarity decreasing every year but it is still very clear compared to other shallow green northern lakes. It needs to stay that way.