Caught fishing with Bink's Guide Service on his spoon yesterday. That is one nice fish. 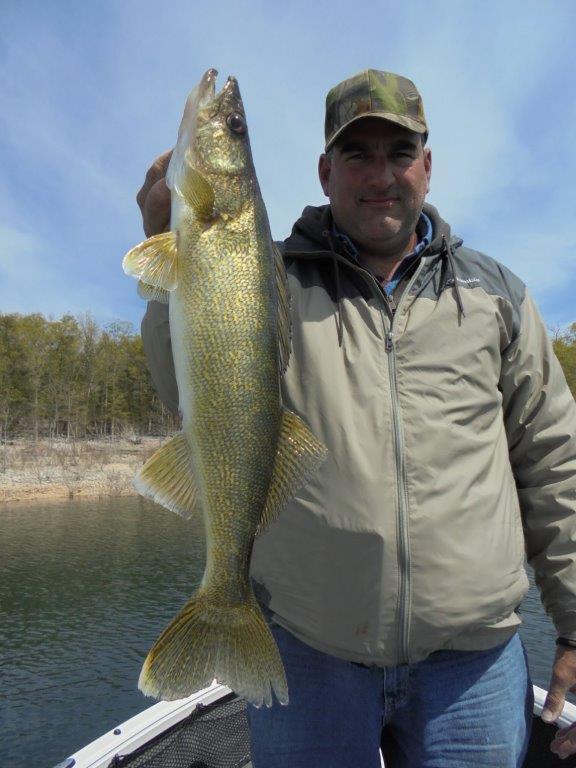 The lake level is 552.63 and has risen 3/4 of an inch in the last 24-hours with two hours of generation. The White River at Newport is at 7+ feet and they are doing a great job of holding the lake level as high as they can for a long as they can. You would think someone would need electricity somewhere in the Southwest Power area. We did recieve a little over 1/2 inch of rain yesterday afternoon and night. The surface water temperature was 47 degrees and the water clarity was better and you could see your lure down about 5-feet. It is the same in the creeks. It was raining just a bit yesterday afternoon when I went out but quit about 3:30Pm and the fishing conditions could not have been better. The ambient temperature was 60 with light winds, very cloudy with a low pressure front moving in. Theses are text book conditions for catching fish and I was not disappointed. The first brush pile that I went to showed crappie near the bottom so I cast a 2-inch grub and minnow over it and let it sink and caught three very large crappie. Two were white and one was black nosed.  They stopped biting so I moved to another one and immediately started catching fish. The one thing in common was that the brush was in 26-feet of water. The brush got my grub so then I switched to a Bobby Garland baby shad and continued where I left off catching fish. Crappie and bass were both in the same places and biting equally well. All fish were keepers with no throw backs. It was good to see some nice largemouth showing up where I had been just catching Kentuckies. It was a fun afternoon and evening. I did see some boats dragging stuff around not too far from me in deep water. Clip a weight on a crank bait and drag it around through shad. When the fish bites on one of the rods in your rod holder reel it in if it does not get tangled up in another of the many lines you have out.   It sounds like fun. If there was one big striper left in the lake I am sure some would dog him down and kill him and brag about it. They will have to use longer and lighter roods and reels with lighter line to convince people that these fish are big like they used to be.  The weather does not look so good for the next few days.  The date is 2-2-22 I hope it is lucky and the ice stays away. Somebody is going to get it.