Scuba Steve with his biggest crappie of the day. 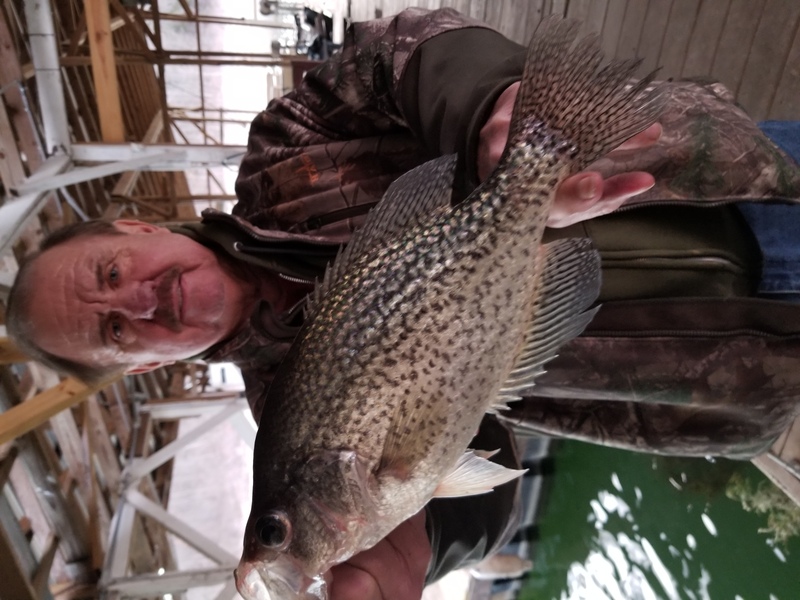 The lake level is 552.58 and has risen 3/4 inch in the last 24-hours with absolutely no generation. The White River at Newport is at 8-feet and dropping. Still no effort to drop the area lakes and we are now in february. We received about two inches of total precipation for the month of January which is about 1/2 normal. If the lake floods this year it will not be because of too much rain unless we get a lot. They have had ample time to drop the lakes for the winter and have not done so or made any attempt to do so. It is better to go into the spring at about 546-47 than 552. It would not have stopped the flood in 2017 but would have really helped in other years. The 12-ft. rule for the level of the White River neeeds to be reviewed. They only follow it when they want to anyway. Minor flooding occurs when Newport is at 23-ft. and nothing is hurt if it is kept just below that. Nobody needs to get flooded out but better management is needed. They changed the rules for the minimim flow for the put and take trout on the rivers, are proposing changing the rules for Beaver Lake management to facilitate a more constant water level, so they can change all of the rules and take away politics for all of the lakes not just in the highly populated areas. If safety is a concern, then they need to start with the oldest dam first which is Norfork. I worked on improvements until about 4:PM and then went out on the lake until about dark. We are really getting things in good shape here for you with no increase in price. Blackburns is the family and fishing resort and we have put in several brush piles to help you catch fish when you get here. We will show you where and how. Most of our customers are repeat and already know how. It was nice and warm and a little windy but it went down just about when I got to the first brush pile. I wanted to check out the new ones. They held bass earlier but the crappie were there now and some big ones too. I started off with the 1/4 once Bink's Spoon and then switched to the Bobby Garland Baby shad. Both caught fish with the bass liking the spoon better and the crappie liking the jig. A couple of the crappie were very large and were right on the bottom in 25-ft. Stripers are still biting and people are still fishing deep and killing them. I guess they need meat pretty bad and want to finish off any decent sized ones that are left. I am not fishing for them anymore until they make a comeback but that is why they were put in there so they might as well finish them off and then learn how to catch other fish. There are quite a few smaller ones. The weather does not look good for the next few days. We can take the snow but keep the ice away. It looks like we will get both. It does not look good for the Jonesboro area. I wish it would miss everybody. Surface water temperature was 46 yesterday but the frozen stuff will not raise it any. The normal average high is now 46 degrees which is the same as the water temperature. The lake water clarity is the same. It starts to clear and then clouds up again but is a good color for fishing. I have one project to finish and then I will go fishing until it rains me out. It is to get very cold later this week. This looks like the last decent day for a while and that will end later this afternoon.