Tom Kelly with some nice ones yesterday on Blackburn's new brush piles. He is one good fisherman and releases almost all of his fish. 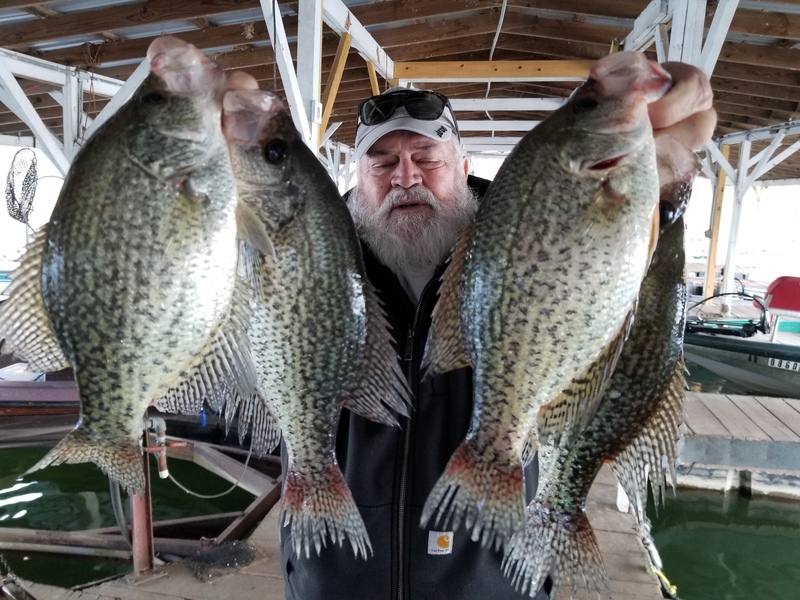 The lake level is 552.47 and has risen just a bit with no generation for 24-hours but they just started again last hour. The White River at Newport is 10.94 feet and there continues to be no effort to drop the area lakes for the winter and we are in february on tuesday. The water surface temperature is between 45 and 46 where I have been fishing and the clarity is pretty good but not nearly as clear as a few years ago. I remember when you could see the bottom in the winter at 25-ft. but those days are over. There is a pretty important workshop coming up on tuesday February 1st here in Mountain Home at the Sheid auditorium at the college from 5-8 PM. It is concerning how the Beaver Lake Dam is managed. It addresses increasing minimum flow, the 12-ft. rule and giving that lake priority in keeping the level lower during periods of high rainfall at the expense of the other lakes. Even though Norfork is not on the White River chain of lakes it is being managed as it is because the Norfork River discharges in to the White River at the town of Norfork .  Safety is being brought up as the reason and the threat to the increasing population below the dam. Beaver was built in 1966 and is twenty years younger than Norfork. I suspect economics and politics might be involved with many affluent people building below the dam and on the lake in that area. They would like a more steady flow into the river, less periods of high flows and a lower level maintained. I understand that. We all would. Since Norfork is the oldest dam in the area I propose that any changes to the Beaver Lake management be also implemented at Norfork with no lake getting more priority than the other. We need to be safe here also.Table Rock already has priority with it's proximity to Branson and it only leaves Bull Shoals and Norfork to hold the bag. After Table Rock was built Taneycomo is now a tail water of it from the dam spillway so it will not be affected.  I do not know all of the details but encourage interested people to attend the workshop. Maybe all of the area lakes need to be managed differently.  I am a proponent of that. The weather was much better yesterday and it looks like it will continue for a couple more days. It is beautiful today but that is to end wednesday night with a cold weekend ahead. Fishing just gets better and then another cold front comes through. This could be the coldest of the season. I do not like snow but would much rather have it than ice. Typically the ice goes just north of us into the interstate 44 or highway 60 area but not always. We had one bad one in 2009 which I will never forget. We are to be on the border of rain, ice and snow and it concerns me. It will hit somewhere and I do not wish it on anybody. Tom, Mike, Bink and myself all caught fish yesterday. Bink is still on the temperate bass in the Big Creek area and the rest of us are fishing from Float Creek to Cranfield Island. Some nice ones were caught and most were released. Spoons, jigs and grubs continue to be the best lures and the bank out to the brush continue to be the best for crappie and bass. Mike caught a nice walleye right at dark on the spoon. I did not. Late afternoon and evening bite is the best. Enjoy the nice weather for now.  It gets busy here at Blackburns about the middle of March. Give Debbie a call at 870-492-5115. Best place, best price, closest to Mountain Home, dining and shopping.