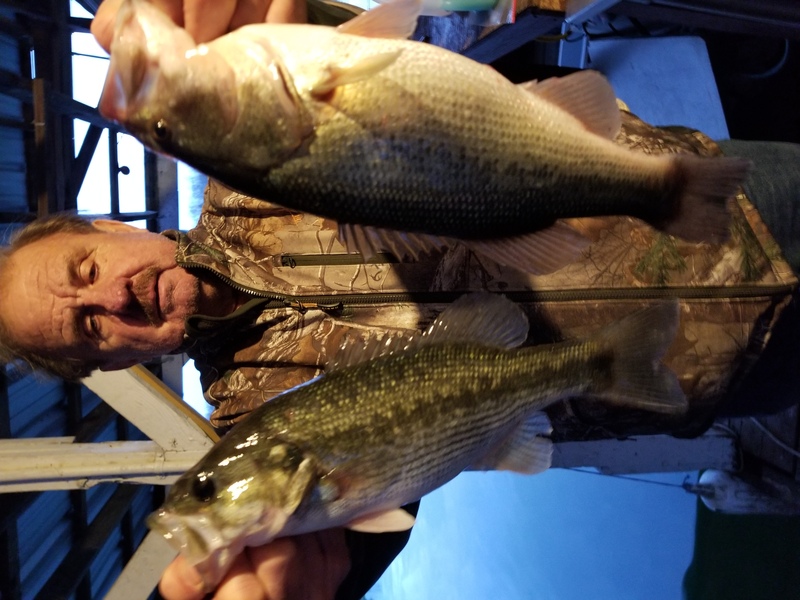 The lake level is 552.55 and has dropped 1-1/2 inch in the last 24-hours with generation about 1/2 the time. The surface water temperature was 46 degrees and the ambient temperature was just over 40 in the afternoon when I went out yesterday. The wind was light and the fishing conditions were pretty good but it could have been a little warmer. That should happen later this weekend and then there is a good chance of rain for several days next week. The water color was just about right and I could see my spoon down about 4-feet. All I wanted to do was check out the new brush piles that we put out the day before. They both held fish already and the bass were biting, especially the Kentuckies. I brought my limit back and released them under the dock. They were right in the brush. That was all I wanted to know so I came in just before dark. We have had a few very warm days in January but mostly it has been cold. There were several striper boats with several rods out trolling between the bridges. They must have been catching something but I do not know. Several bass fishermen are having a hard time and are turning into striper fishermen as they are easier to catch now. There must have been a good class of about three years ago because there are a lot of fish in the 5-8 pound range being caught recently. The game and fish are starting a tagging study to determine the numbers and size of stripers being harvested in several of the area lakes to determine if there needs to be a change in the size limitation. Norfork Lake, Beaver and Ouachita are included. I personally would like the size limit to be increased and the number limit to be decreased but it will not do any good if people keep fishing for them in deep water and releasing dying fish. I am sure they will do what is best. I am not going to fish for them for a few years until they make a comeback, if they do. Way too many of the smaller ones are being killed now. There are a few of us that were around and remember what Norfork Lake Striper fishing used to be like and it is a shame what has happened. Maybe it will get better but not at this rate. I did not catch one crappie yesterday but it might have been that they had not moved into the new brush yet or it could be that they were just not biting. I did not see any down there but they might have been right in the brush with lockjaw. That happens too. I like winter bass fishing just a much. I bought a new belt for my Kawasaki Mule and it was $90. It was $48 a year ago. I do not like that. The money you save by staying at Blackburns will about pay for your fuel to get here and that will help slow inflation. Gas prices are going up almost everyday and you will not see many motor homes dragging cars behind them this summer. It was nice when gas was $1.70/gallon a year ago.  You do not have to go far from Blackburns to catch fish as we are about in the middle of the lake and this area has some of the best fishing. Come on down. We will not charge you too much.