Mike Eakle with some pretty good ones yesterday. We will show you where when you get here. Brush piles are going in as we speak. 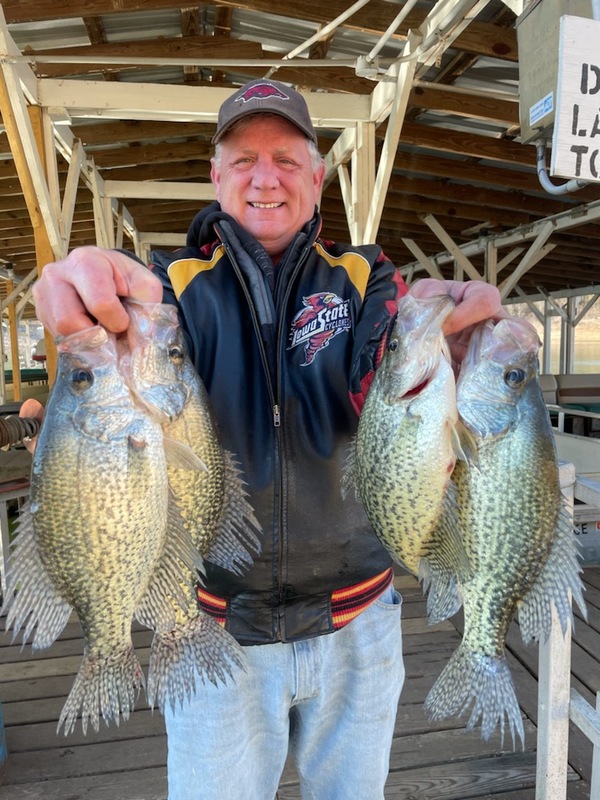 The lake level is 553.21 and has dropped 1/2 inch in the last 24-hours with generation for just a few hours. The White River at Newport is at 14+ feet and dropping. The surface water temperature was 47 degrees, the ambient tempoerature was in the high 40's  and the lake clarity was stained on the main lake and a little less so in the creeks especially near the bank yesterday afternoon when I went out. It was a little breezy from the west but not bad. The first three Blackburns brush piles that I went all had fishermen camped on them but the fourth one was open. I will put this year's trees in new places so our customers have more places to fish, That is why they are put in. I wish more resorts would do so. We will show you where ours are when you get here and we have some good ones. It is very warm and breezy today already with ambient temperatures to reach 60 with a cold front coming in later with highs to get back into the high 30's for a few days. One more week left in January and the moon is getting smaller with the last quarter to be tomorrow. Crappie, bass, catfish and walleye like the dark of the moon. I do also but it is nice coming in after dark during the full moon.  The fish were biting steadily but not fast and I caught my 5-crappie limit, and a nice Kentucky Bass and a very large bluegill and came in just before dark. The fishing was pretty good but they were not as large as the day before and the bite was not as fast. Tom, Mike, Bink all caught fish also. Our striper fishermen report catching several in the 5-8 pound range but no picture fish. Bink is really on all kinds of temperate bass back in Big Creek. The fishing pressure is increasing on Norfork, especially on nice warm days. Everyone is tired of winter already. The lake is in good condition now and at a good level but I am still concerned about going into the spring at this elevated level again. It just does not have a habit of working out and there seems to be nobody concerned or willing to do anything about it. We will get a big rain before May, you can count on it. Yes Blackburns Resort is open all year, no we are not on vacation and are also not for sale and are not raising our prices this year. We just keep getting these questions for some reason. Come on dwon. We will not charge you too much and your first normal sized boat stall is free.