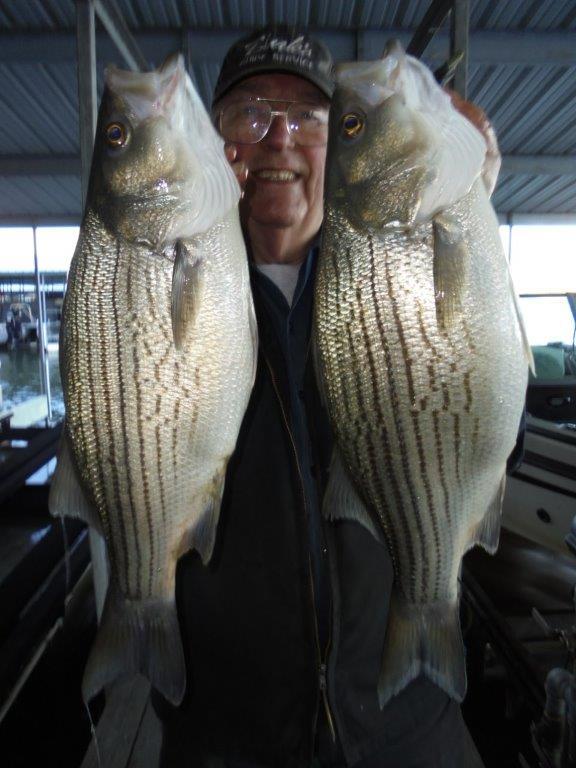 The lake level is 553.63 and has risen 4-inches in the last 24-hours with just a few hours of generation. The White River at Newport is 17+ft.  We are headed in the wrong direction and are about out of the power pool of 553.75 which used to be 552 before the wothless mimimum flow to help the put and take trout in the plastic rivers and taking away flood capacity. Let out water from dam, river. Shut off water, dry.  If they cannot drop it in the middle of January they must not be going to do so. At least the water is at a good level in the winter when nobody is here. The surface water temperature is about 50-degrees and lower in the backs of the creeks. My rain gauge is frozen up but KTLO reports about 1-inch of total moisture with most of it being rain and a little less than 2-inches of snow. It did not quite cover the ground and should be gone by tomorrow. The snow flakes were huge and just floated down with no wind. The wind is to pick up tomorrow and then get cold again later this week. Our normal high is 43-degrees. Bink is doing the best now and is catching all kinds of temperate bass in the same spot with a lot of white bass. They have been in the same area for a month and are showing no signs of leaving. He is fishing the Big Creek area. The threat of snow run off several of our guests but they caught fish right up until they left and good ones too. Several white bass are from out front of the docks on Mallard Point to Southwest of Cranfield Island with some Hybrids mixed in. Some of them will move upstream to spawn in Late February and March but have shown no signs of doing so. The water temperature needs to be above 54-degrees. The ones being cleaned at my dock have eggs but nowhere near ready with no bloodlines. Like the walleye the so called run is not nearly what it used to be but the numbers are starting to come back. I do not know what percentage of walleye spawn in Norfork but the total numbers are higher than I have ever seen them and they are getting bigger. In May when the thermocline forms is the best time to catch walleye on main lake points in 16-20-ft. of water. Bink catches them deep in the summer but I do not fish deep anymore. I received my Norfork Lake fish cover permit yesterday and am getting ready to put in brush and know just the places where I want them. You will have some good places to fish when you get here. We do it for our customers and it would be nice if more people would do it. They really help. I am getting really tired of this inflation and high gas prices but the money you save by staying at Blackburns covers most of it if not all.