Dave Titus with some nice ones. 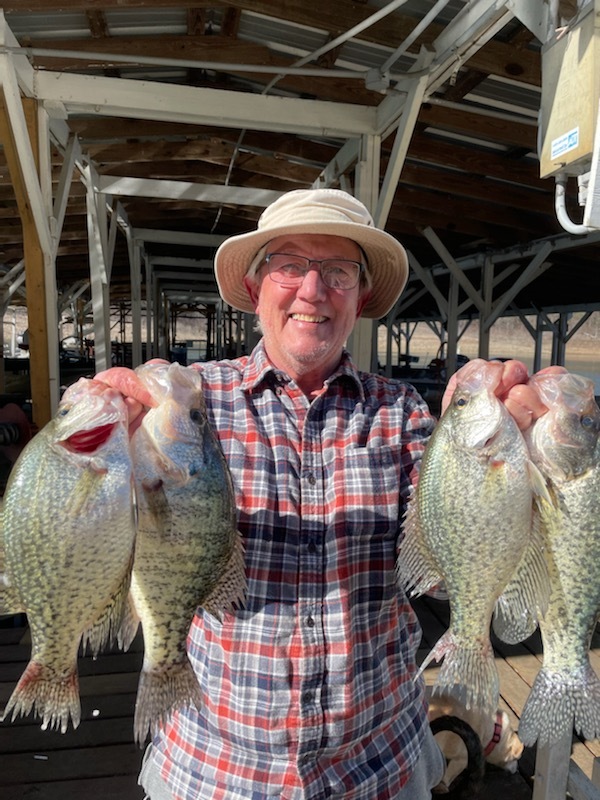 The lake level is 553.25 and has dropped 1/2 inch in the last 24-hours with just a few hours of generation. The surface water temperature was 50.5 last eveing and the water did not clear any from the day before and maybe got a little more cloudy. I cauld see my lure down about 3-feet. The White River at Newport is 17.85 and dropping fast. The ambient temperature was in the low 60's and the wind had shifted to the northwest at about 5-10 but it was easy to get out of it. I fished brush on a south facing bank and caught my limit of five crappie and the wind stopped about 4:PM and then I moved to my winter bass bank and caught two nice bass, one a Kentucky and the other a largemouth, lost my grub on a rock and came in just at dark. I do not like to fish when I cannot see my line but just do not want to give up on the day. It was a very nice winter day and I was happy to be out. Other people fishing out of the resort got several stripers, bass and crappie. Striper fishing is pretty good at this time as is crappie. Several crappie are about 11-inches but a few are about 13-inches. The people catching stripers are spooning for them in 45-50 ft. of water near Blackburns but Bink is catching all kinds of temperate bass deep with his 3/4 ounce spoon. He has found them and they have not moved for about three weeks. The ones in this area are moving around but not too far. They are just roaming after shad. The largest ones are just under 10-pouinds. Some nice hybrids and white bass are with them. The bite has held on with the warm water temperatures later than normal. Usually January can be tough. The crappie were biting in or close to brush in 25-ft. of water. The moon is getting big again and bluegill and stripers like it just before it gets full and the bluegill started biting again yesterday where I had not been catching many until then. Catch two big ones, fry up the four fillets, add black pepper and slice of onion on some buttered bread and nothing else. It does not get any better than that. Two sandwitches are just right. You can substitute crappie, walleye or Kentucky Bass and get almost the same results. All fish are good out of Norfork Lake. Today may be the best fishing day for a few so I must get my work done and get out. Best bite, 3:30-5:30 PM. Looks like some weather moving in tomorrow and then warm back up next week. January is a long month but it has not been bad so far and it is 1/2 over tomorrow. I wish the lake was about 6-feet lower going into the spring. No price increases here at Blackburns this year and your first boat stall is free unless you bring the Queen Mary.