Mike Eakle with some nice ones. 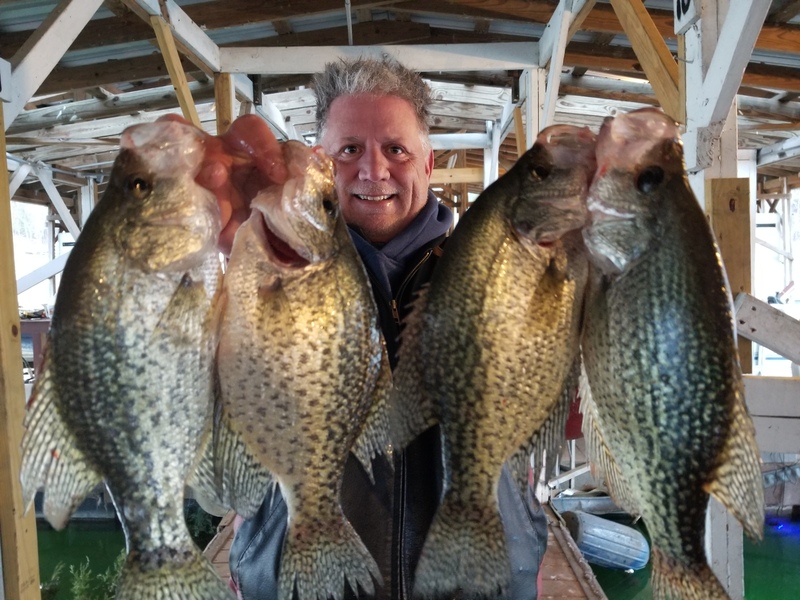 The lake level is 553.34 and has dropped less than one inch in the last 24-hours with just a few hours of generation. The White River at Newport is at just over 19-ft and dropping. Some of the brown had dropped out of the water near Blackburns where I was fishing yesterday and it was still stained but a little more green. I could see my lure down a couple of feet. It was very nice out after it warmed up and the wind was light except between the bridges and I was able to get completely out of it so I fished brush for crappie with the 1/4 ounce Bink's spoon. Between the bridges is usually the windiest place on the lake. It is better to fish over brush when you do not have to use your trolling motor very much and I use it a sparingly as possible and keep the spoon straight up and down bumping the brush for crappie and bluegill or bottom right next to it for bass and walleye.  I caught my self-imposed limit of five in the range of 11-13 inches and then moverd to the bank in chunk rock at sunset with the grub. Fishing was slow but steady and four bass, two Kentucky and two Largemouth were caught and released on site. There are two places where the fish have been biting consistently for me and they are just off the first dropoff on the ledge in 10-12-feet of water. There are a few big crappie with them. The bass are keeper sized but not as big as usually caught this time of year. The surface water temperature was exactly 51 everywhere I went. The weather is to be very nice for the next several days with high pressure holding in until the next cold front and wind. The warm weather brought out more fishermen yesterday and several of them are staying at Blackburns. I go out in the warmest part of the day and come in when it gets cold but those Michigan and Wisconsin people start early and come in late and do not complain about anything.