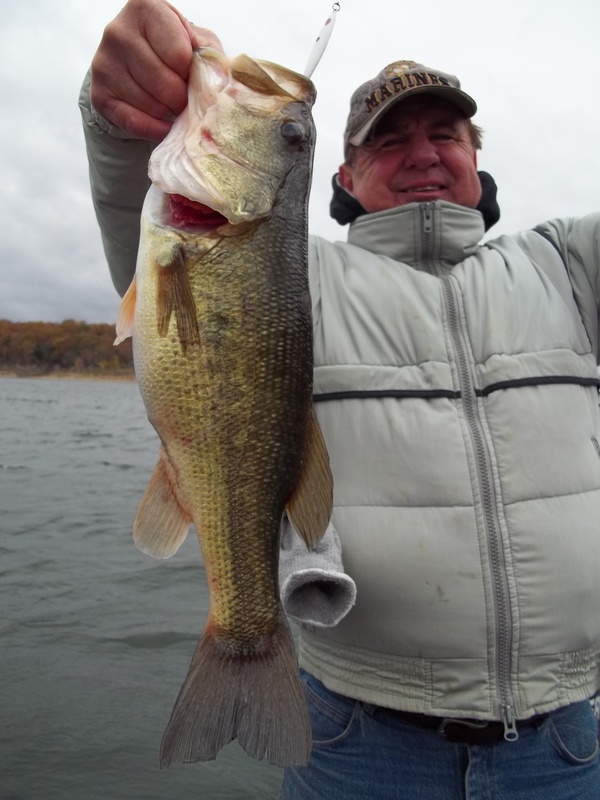 The lake level is 553.80 and is just about what it was at this time yesterday with very limited generation. The White River at Newport is still at over 19-feet so do not expect much for a while. At least they are trying. The water surface temperature was 52.5 on the main lake when I went out yesterday afternoon bass fishing. I found several schools of fish in open water on the way but they were just white bass and small stripers. Some of the white bass were a couple of pounds but I do not take pictures of white bass. The wind was not bad but kept me from doing what and where I wanted to go. When I went to a brush pile just off the main lake and partially out of the wind the fish were biting but mostly small bass, 10-11 inch crappie and big bluegill so I moved. Usually the wind drops about 4:PM if it is going to so I moved to the main lake and found some nice largemouth bass. The wind finally layed just when it got dark. The fish were still in chunk rocks just off the bank in 10-ft. of water and were biting the green grub. I caught two nice Kentucky Bass and then a couple of big largemouth for Tom Kelly's trophy pond and came in at dark. I really like winter bassin but it has been a long time coming this season and better fishing is expected. The wind is calm this morning and it did not get cold last night and I expect some open water fishermen to find some more temperate bass today as they are everywhere at this time. I just wish they would quit killing those small stripers. Fishing overall is still just fair but is getting better and it needed to. Another cold front is coming and bringing more wind. Wind lovers should be happy. I did not catch a walleye but did catch a couple of white bass, smaller crappie, kentucky bass , bluegill and nice largemouth in a couple of hours of fishing. The green stingray grub and spoon are the best lures.