Mike Eakle with some of yesterday's catch. 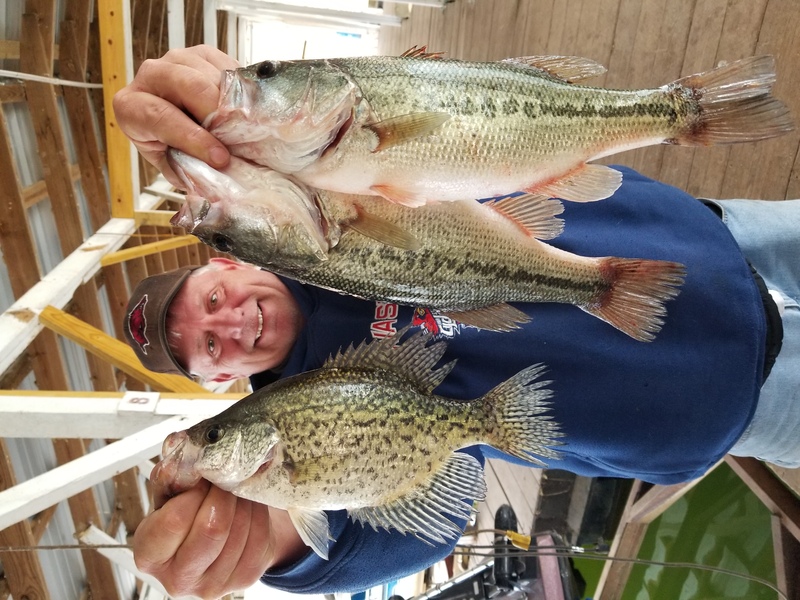 The lake level is 553.62 and has dropped 2-inches in the last 24-hours with both generators running about 1/2 the time. We did receive about 1/4 of an inch of rain in the morning. The level is now below the power pool and is mostly in the hands of Southwest Power. The White River at Newport is now at 11-1/2 ft.  It was cloudy in the afternoon with an ambient temperature of near 60 when I went out fishing. It cooled quickly in the evening but the wind was very light an non-existent as the sun went down. The surface water temperature dropped just a bit and is now just under 56 degrees. Cloudy with light rain until saturday with temperatures dropping during the day and very cold lows saturday night. It should not last too long. We will see what actually happens. Fishing has not been the best the last few days but some nice fish are being caught but not in high numbers except for Bink which is on the temperate bass on the south end of the lake in deep water on the bottom. The rest of us are catching bass, crappie bluegill and a few walleye but are having to work for them. I saw some fish surfacing at about 4:PM throughout the main lake and lots of shad with fish on them in Blackburns Creek. I was ready to come in so I left them alone. Tomorrow is to be the pick day of the week as far as weather goes and then the cold front and wind comes in. Spooning is still the best lure right now but some live bait trollers are still catching and killing small stripers. We have not had any winter yet but it looks like the cold will hit us soon. If you have not checked your lower units for water and line behind the prop you better keep them off the lift and the trim in the water on saturday. IO's better be winterized or brought in. Just sayin.