James Soltysiak with some of yesterdays catch. 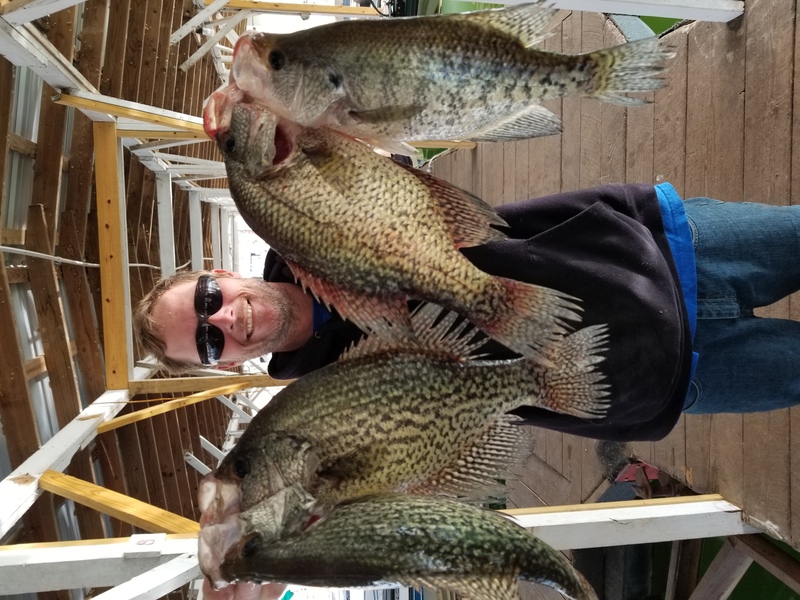 The lake level is 553.79 and has dropped 3-inches in the last 24-hours with both generators running about 3/4ths the time. The White River is just over 11-feet at Newport and dropping. We are approaching the power pool of 553.75 and we will see what happens then. The last several times we got here they cut the generation drastically. We are almost to January and if they are going to drop the lake it is time. Otherwise they might as well not even open the campgrounds. The lake is at a good level now though and is in excellent condition with a surface water temperature of 57. The warm weather is bringing out more fishermen than normal for this time of year and I saw quite a few boats out there yesterday and also trailers at the ramps. Several fish were caught by several fishermen but not as many as the day before. Bink reports he is still spooning open water for temperate bass and walleye and catching several in deep water on the bottom. Tom Kelly was fishing near the shore for bass in 12-16 feet of water with his whacky worm and the rest of us were spooning brush. Bass fishing was the best for us brush fishermen with crappie slowing a bit. Some very nice bass, mostly Kentuckies, were caught along with a few crappie but they were very large. It was a little breezy in the afternoon but not bad and it layed in the evening. It looks like a cold front is going to hit here right after new years but the warm weather got us through 2021 with no winter yet and that is very good. After January 1st. spring is on the way. A lot of shad are moving part way back in the creeks in about 40-45 ft. right in the creek channel with different species of fish in them but they are not biting very well. The white bass on them are not very big but the ones Bink is catching are good sized. Smallmouth Bass are showing up but are mostly small. I am ready to get after them when they grow up and I am hoping soon. Main lake river channel banks near the shore is the place to start looking for them with the grub on the bottom. A lot of work is getting done around here but a little fishing also. I have cold weather gear but was hoping not to have to get it out but it looks like early next week I will have to. It will weed out several fair weather fishermen. Your first boat stall is free here at Blackburns and we have different sized ones for different boats. No 1-size fits all.